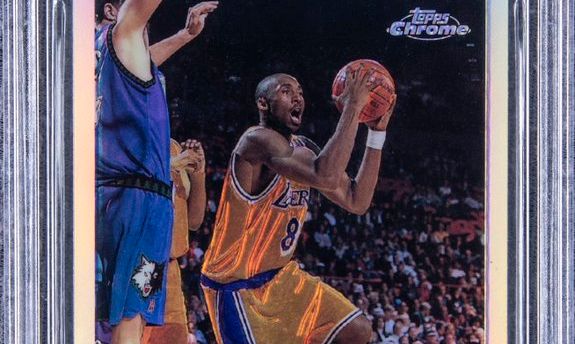 According to ESPN, a rookie basketball card featuring the former NBA champion was auctioned off for $1.795 million over the weekend on Goldin Auctions.

According to Goldin Auctions, an online auction house and repository for sports memorabilia, it is one of the most expensive basketball cards ever sold.

An all-time record for any Kobe Bryant card. pic.twitter.com/dTStDwavHx

“Kobe Bryant was one of the fiercest competitors of all time and a truly larger-than-life figure. His rookie card is one of the rarest in existence and one of only two on earth in black-label pristine condition, which is the highest possible obtainable grade. The fact that it sold for the final auction price of $1.795 million, the all-time record for any Kobe Bryant card, speaks to just how beloved he was around the world,” Ken Goldin, founder of Goldin Auctions, told ESPN on Sunday. “The enthusiasm for trading cards and memorabilia has never been higher and as even more people recognize the incredible investment opportunity these assets offer, we anticipate that interest will only continue to grow.”

Kobe Bryant rookie card sells for $1.79 million tonight at @GoldinAuctions, now the 10th most expensive card purchased of all time.

Bryant played his whole 20-year NBA career with the Los Angeles Lakers. He was a five-time NBA champion, a two-time Finals MVP, and the league’s most valuable player in 2008 . During his career, Bryant made the All-Star team 18 times and was the youngest player to ever reach 30,000 points. Bryant retired from the NBA in 2016, scoring an NBA-season-high 60 points in his final game.

The 41-year-old basketball legend died in a helicopter crash in Calabasas, CA, along with his 13-year-old daughter, Gianna, and seven other people on Jan. 26, 2020.