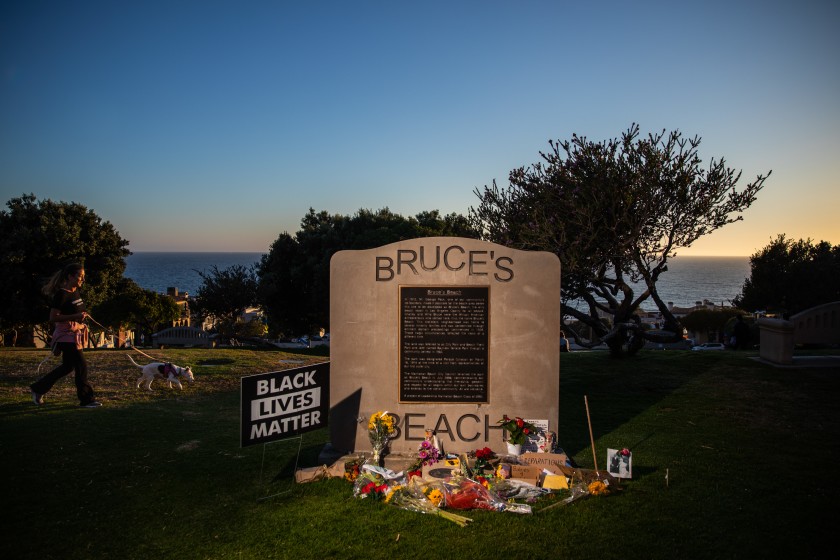 Bruce's Beach was a beach resort for African Americans due to segregation. (Image: Twitter/@LATimes)

Almost a century after the city of Manhattan Beach used eminent domain to take an area known as Bruce’s Beach from its Black property owners, Los Angeles County is trying to return some of the land to the rightful owners.

Los Angeles County Supervisor Janice Hahn announced in a statement, the county plans on repurposing Bruce’s Beach and giving the land to the descendants of the original owners.

“The property that was once the Bruce’s is now owned by the County and I want LA County to be part of righting this wrong,” Janice Hahn, LA County Supervisor said according to NBC LA. “I am looking at everything from repurposing the property in a way that tells the history of Bruce’s Beach to actually giving the property back to the descendants of Charles and Willa Bruce.”

The Bruces purchased the land in 1912 and developed it into a beach resort for LA’s Black residents who were faced with intimidation and threats at other locations. However, in 1924 Manhattan Beach’s City Council used eminent domain to take the land from the Bruces, claiming they were using it to build a park.

The park wasn’t built until more than three decades after the land was taken. The county now owns the land and uses what used to be Bruce’s Beach to house its lifeguard headquarters and training facility.

During the mid 2000’s, Mitch Ward, Manhattan beach’s first Black Mayor, changed the name of the park to Bruce’s Beach and had a plaque installed to commemorate the Bruces’ effort. However, many criticized the plaque as incorrect and incomplete.

The petition called on Manhattan Beach Mayor Richard Montgomery and the City Council to restore the land to the Bruce family, provide restitution for 95 years of revenue losses, and pay monetary damages for the violation of the Bruce’s civil rights.

In response to the awareness of the situation and the potential backlash, the county has put together a 15-member task force to address the future of Bruce’s Beach including changing the plaque to be more accurate, including artwork in the space and bringing more awareness to the Bruces’ story.

Even that has created controversy. Ward and others involved in the situation say the task force does not have enough Black members and is not working with the Bruce family. The task force is expected to present its recommendations later this year.