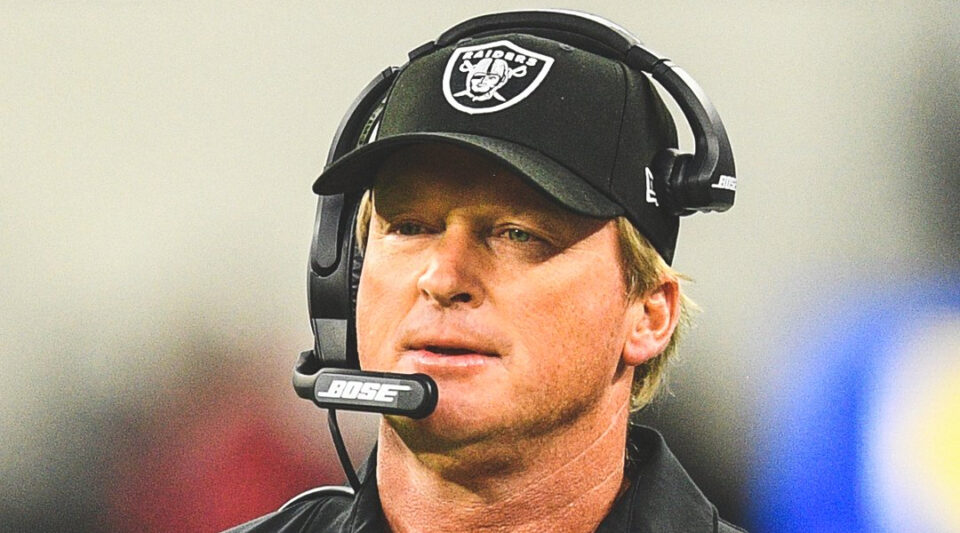 As a result of the explosive articles published in The Wall Street Journal and New York Times about the use of racist, homophobic and misogynistic phrases uttered by Las Vegas Raiders head coach Jon Gruden while he was an ESPN analyst, he has resigned from his position.

According to NFL.com, Gruden, who was currently five games into the fourth season of a 10-year contract with the Raiders, used a racial metaphor in an email he wrote back in 2011 towards NFL Players Association executive director DeMaurice Smith, who is Black.

In the article that appeared in The Wall Street Journal last week, Gruden sent an email to the Washington Redskins’ then-president Bruce Allen. In that email, he wrote, “Dumboriss Smith has lips the size of michellin tires.”

The former head coach initially apologized and stated that he isn’t a racist and he was sorry for the “insensitive remarks” he made at the time, but, there were no intentions to relinquish his position as he coached the most recent Raiders game.

It wasn’t until after The New York Times released a report Monday night that stated the 58-year-old Gruden had also used homophobic and misogynistic terms in other emails that dated back to 2010 that he felt the need to resign as head coach.

“I have resigned as head coach of the Las Vegas Raiders,” Gruden said in a statement that was posted on the Twitter account of NFL Network Insider Ian Rapoport. “I love the Raiders and do not want to be a distraction. Thank you to all the players, coaches, staff, and fans of Raider Nation. I’m sorry, I never meant to hurt anyone.”

“I have resigned as Head Coach of the Las Vegas Raiders. I love the Raiders and do not want to be a distraction. Thank you to all the players, coaches, staff, and fans of Raider Nation. I’m sorry, I never meant to hurt anyone.”

In the latest report about the reckless words he delivered via email, it was alleged that Gruden used homophobic and misogynistic terms to describe NFL commissioner Roger Goodell. It was also noted that the former coach had reportedly emailed Allen that Goodell should not have pressured then-Rams head coach Jeff Fisher to draft Michael Sam, who was the first openly gay player drafted by an NFL team back in 2014.