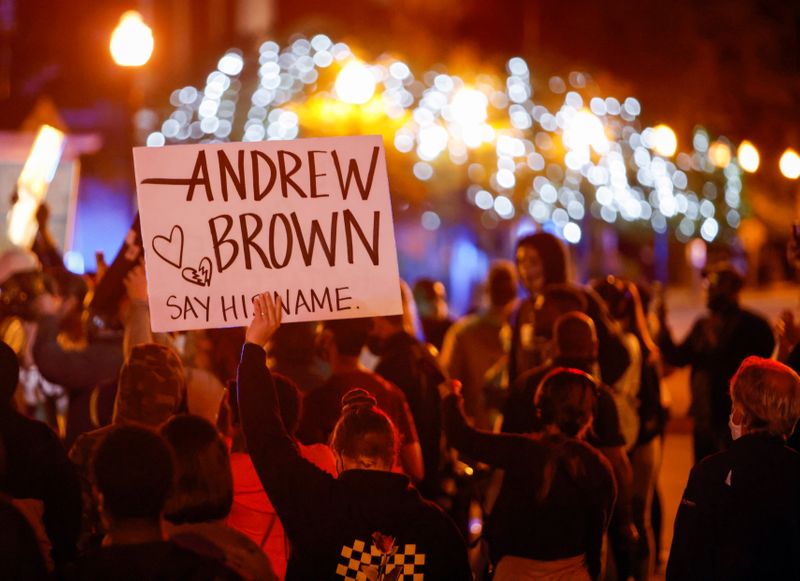 Reuters – Lawyers for the family of Andrew Brown Jr., a Black man killed by sheriff’s deputies in North Carolina during an attempted arrest, said on Tuesday that an independent autopsy showed he was shot five times and died from a ‘kill shot’ to his head as he tried to drive away.

Brown, 42, was struck with four bullets in the arm before the fatal shot to his head, lawyers for the family told a briefing in Elizabeth City, a riverfront community near the Virginia border where the shooting took place last week.

“It was a kill shot to the back of the head,” said Ben Crump, one of the attorneys. “It went into the base of the neck, bottom of the skull and got lost in his brain. That was the cause of death.”

Brown’s death led to six nights of protests in Elizabeth City and came one day after former Minneapolis police officer Derek Chauvin was convicted of murdering George Floyd in a trial that put a spotlight on police violence against Black people.

The Brown family’s lawyers have said the deputies continued firing their weapons after Brown drove his vehicle away from them, calling his death an “execution.” The lawyers have also accused officials of withholding evidence after being shown only 20 seconds of footage from one police body camera on Monday.

Pasquotank County Sheriff Tommy Wooten and Chief Deputy Daniel Fogg have said the deputies were trying to serve warrants on Brown stemming from a felony drug charge, and that Brown had a history of resisting arrest. They urged the public to reserve judgment until all evidence is reviewed by the State Bureau of Investigation, which is overseeing the probe of the shooting.

“An innocent man was killed by law enforcement. Overkill. He wasn’t fleeing. He was trying to run because he was scared for his life,” said Harry Daniels, attorney for the family.

Wooten’s office said on Friday that seven sheriff’s deputies had been placed on administrative leave after the shooting.

Khalil Ferebee, Brown’s son, said his father was trying to “get away” when the officers shot him.

“Yesterday, I said he was executed. This autopsy report shows me that was correct.”