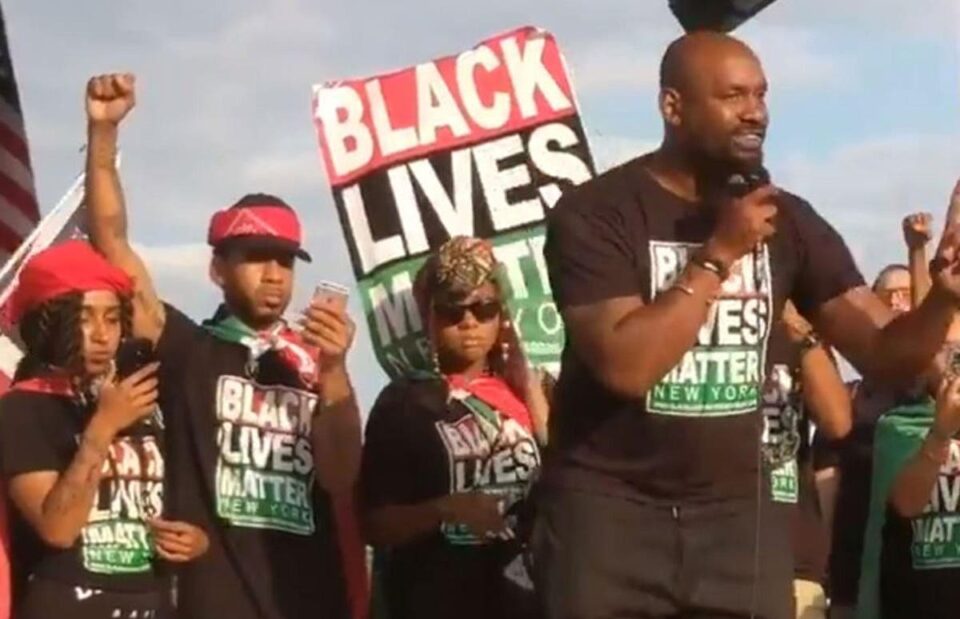 Black Lives Matter activists in New York are calling out the city’s leadership over what they believe are racist COVID-19 vaccination requirements.

Since mid-August, the city has required anyone 12 and over to show proof they’ve had at least one COVID-19 vaccine dose for indoor dining, gyms, museums, theatres, and a host of other indoor activities. However, Black residents are lagging behind the overall populations in vaccinations, and some say the rules are disproportionately affecting Black New Yorkers.

More than 70% of Black Americans between 18 and 44 in New York City have not gotten the vaccine, a statistic repeated by activist Chivona Newsome at the restaurant protest of Carmine’s Italian Restaurant.

Hawk Newsome, a Black activist and the co-founder of the Black Lives Matter Greater New York chapter, organized a protest outside of the Manhattan restaurant where a hostess claimed three Black women from Texas attacked her after she asked for them to show proof of vaccination.

Newsome and his sister, Chivona, organized a protest outside the restaurant earlier this week where Hawk accused the city of using vaccine requirements to cover for its “racist ways” and “discrimination.”

NEW YORK: BLM activists confront the Carmines restaurant continuing to accuse them of being racist after an altercation over vaxx papers took place a few days ago

Newsome told the Washington Examiner that the group is not against the vaccination, but they believe it should be an individual’s choice whether to get vaccinated. They also insist they are not on the right and do not align with Republicans because their platform is built around the oppression of Black people.

“We are not anti-vaxxers. Some of us are vaccinated,” Newsome said of his group. “It’s an individual’s choice. No one should be forced to put something in their body.”

At the beginning of the pandemic, COVID-19 cases and deaths were impacting Black Americans more than any other race due to factors of systemic racism including, poor or no health insurance coverage, inability to telework, and lack of access to childcare.

“I think, in a perfect world, vaccine requirements] should be business by business. But it could be a slippery slope, so the mandate should be removed completely,” Newsome told Yahoo News. “It’s not gonna be white men in suits on Wall Street who are gonna get stopped. There’s such hypocrisy in this thing.”

Newsome and the Black Lives Matter of Greater New York are advocating for the complete abolition of vaccine requirements at the city and national levels.