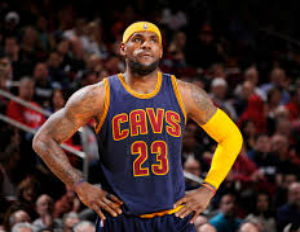 Today, on Dec. 30, LeBron James turns 31 years old. The American pro basketball player was born in 1984 in Akron, Ohio. Even from a young age, he showed a natural gift for his basketball skills. He was recruited by St. Vincent-St. Mary High School to join their basketball team in 1999. Averaging 18 points per game, he led the team to a Division III state title, and from there word of “the king” LeBron James grew.

The young forward was the first player to be picked during the 2003 NBA Draft, signing with the Cleveland Cavaliers. Around the same time he signed several endorsement deals, including a deal with Nike for $90 million. During the 2003-04 season, he became the first member of the Cavalier franchise to win the NBA Rookie of the Year Award, and that summer he made his debut in the Olympic Summer Games in Athens, Greece.

Perhaps his most famous decision, to join the Miami Heat for the 2010-11 season, left him in a frenzy and became a topic of controversy among fans, athletes, and in the media. However, he did his thing and won two NBA Championships with the team. After the 2014 season ended, he made another big decision–to return to the Cavs.

Earlier this month, James signed a lifetime deal with Nike, which was the first of its kind in the shoe and apparel company’s 44-year history.Â Forbes estimated his net worthÂ at $65 million, ranking him at #6 on the list of the World’s Highest-Paid Athletes in 2015.

Upon the MVP’s return to Cleveland, he signed a two-year, $42.1 million contract, taking a shorter deal rather than singing a four-year contract, leaving him as a free agent again in 2016 when the NBA’s new $24 billion TV deals kick in, essentially increasing the salary cap. Aside from Nike, his impressive endorsement portfolio includes Kia Motors, McDonald’s, Coca-Cola, Samsung, Beats by Dre, Upper Deck, Tencent, and Audemars Piguet. According to research firm SportsOneSource, his signature Nike shoes were the top sellers among active players, at $340 million in the U.S. during 2014, and his Cavs jersey was also the NBA’s best-seller.

Outside of his professional athletic career, James is an accomplished businessman at the young age of just 31. He’s taken his fame to good measures, involving himself in new philanthropic endeavors working to help others. The LeBron James Family FoundationÂ was created in 2004 to help out children and single-parent families in need. In addition, the organization builds playgrounds and has an annual bike-a-thon for the children, who come from unstable economic communities.

Check out a video of his 2015 highlights below.