In New Ads, LeBron's Image Is Smoothed Out on the R&B Tip 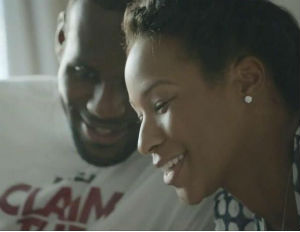 In spot for the new Samsung Galaxy Family, LeBron and wife Savannah view pictures from their recent honeymoon.

Watch more than ten minutes of a sports broadcast and chances are you’ll come across at least one of two beautifully-edited commercials featuring LeBron James.

One is for Nike, the other for Samsung. And James, 29, is cast as an everyman workout warrior who prowls the streets of South Beach toward a gym followed by hundreds of fans (Nike’s ‘Training Day’), and as a newly-married family man whose Samsung Galaxy Family tablet is every bit as essential to the James family household as milk and the Holy Bible (Samsung’s ‘At Home’).

Before long you’ll notice a couple of similarities, (soft light, LeBron’s leading a pack). But both commercials are set to R&B songs: Nike’s to the John Legend and Mike Will Made It produced My Shoes, Samsung’s to Raphael Saadiq’s Keep Marchin’.

Winning back-to-back championships has been an enormous boon to James’s brand. Of course, it wasn’t always that way — it is hard to sell an athlete whose blunder with The Decision caused his city to malign his existence. That is to say nothing of his disastrous performance in the 2011 NBA Finals. For James, the tunes represent something of a redemptive soundtrack for basketball’s greatest player, one of the world’s most coveted endorsers.

For music, many variables in advertising

“With music, brands communicate an emotional language to create a relationship between the song, the product and the endorser,” says Chris Canada, a New York City-based industry insider with 10 years of experience in advertising.

“Many times the actual song choice is based on a few different things, but most importantly the creative payoff, and the budget,â€ he said. “With the song theme, Samsung, for instance, was definitely going for a feel good vibe, and Raphael Saadiq has a wide range of songs with that exact feel.â€

Canada says that if the song doesn’t make or break the overall spot, there will usually be a few different options to choose from. And the budget usually determines how those decisions get made. “Ultimately, when you’re choosing music for a spot you’ve got to make sure that the music feels like the right fit for the spot.â€

Songs command $25,000 to $500,000 per year in licensing deals for commercials, and as R&B titles get a bigger piece of the pie, complexities and business considerations take center stage for a genre of music that at its core has been, despite global appropriation, noted for its blackness.

Canada stressed that countless variables go into something as seemingly direct as music choice; one person, for instance may not agree the material is essential to the spot’s creative payoff — budget restrictions sometimes eliminate some artists and songs altogether.

Commercializing music of the people

R&B’s original cultural role, says the noted jazz pianist Ben Sidran, was music that was not “only a reflection of black culture, but to some extent, the basis on which it is built.”

“Content analyses of black R&B music are important complements to purely analytical research in the search for a comprehensive understanding of the dynamics of the black family,â€ wrote Penn State professor Dr. James B. Stewart in a 1979 essay. It discussed how subject matter in the music of Millie Jackson, Smokey Robinson, Donny Hathaway and others had been a window to shared perspectives about love, conflict and angst in the black family.

Dr. Stewart argued that technology, and “large commercial concernsâ€ with “little vested interestâ€ in the content means the relationship between the substance of the music and the black family — and black values — was in danger of weakening in the process.

“This means that the potential,” he said, “is increasing for the marketing of values by such concerns through the medium of R&B. The potential implications of such a situation are mind-boggling.”

In the Samsung commercial, the lovable Keep Marchin’ from Raphael Saadiq’s 2008 album The Way I See It rings in the background as James looks at honeymoon pictures with his wife, Savannah, shoots hoops with his sons, Bronnie and Bryce. Nike’s commercial is set to the John Legend and Mike Will Made It collaboration.

It would have been nearly impossible, and perhaps foolish, to do a spot like one of those when LeBron’s unofficial approval rating was at an all-time low. After the public relations debacle that was The Decision, and James’s poor performance in the 2011 NBA Finals, James was a pariah, a target for all that was wrong with rich, young athletes. Nike chose to portray him as forlorn, contemplative, misunderstood.

Then a funny thing happened: he won. Miami dispatched Oklahoma City in short order in the 2012 Finals and before long, Samsung came out with its commercial for the Galaxy Note II. It follows LeBron documenting his day and receiving congratulatory texts on his device on the day he was to receive his first run. The song in the commercial is The Impressions’s Keep on Pushing.

“An NBA championship will finally brand LeBron a winner, probably the most coveted character trait a company looks for in a product endorser,â€ New York-based sports marketing expert Robert Tuchman told Advertising Age in the summer of 2012. “It’s going to lift him into the endorsement stratosphere where only Peyton Manning lives.â€

Not only does he live there now, it only means LeBron’s options are more wide open than they have ever been before — and they’re still expanding.

NYU sports management professor Robert Boland told Ad Age, “His existing sponsoring partners will have much greater latitude on how they use and position the LeBron brand again, kind of an image reboot rather than a true redemption.â€

Regardless of how his comeback is interpreted, soul music is figuring more and more into the branding of LeBron James. There is a unique connection between the two, an emotional effect on the brains of the millions who will watch the commercials.

But now, perhaps more than ever, a black cultural pillar is the currency of billion-dollar companies seeking to etch its messages in the minds of consumers. Maybe it means nothing. Maybe like Dr. Stewart suggests, someone ought to be concerned. Asked to comment on the process of its musical selection for the Samsung spot, the agency 72 and Sunny offered little insight.

“There are not any comments on the music,â€ a spokeswoman said.