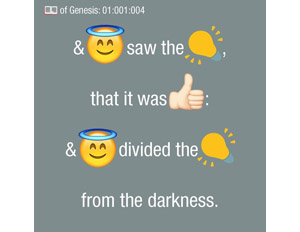 A new app for iOS has just been released that translates Bible scripture into emojis.

Guardian Australia interviewed the app’s developer, who prefers to remain anonymous (although the iTunes seller is named as Zach Swetz). The developer did not tell the outlet his or her religious affiliation, but said, “I [definitely] [flexed biceps emoji] agree with Jesus’ message of course.â€

The app links 80 emojis with 200 corresponding words and took about six months, according to the developer.

It is described in the App Store as, “The first ever Bible translation w/ emojis, [and] a great and fun way to share the gospel.â€ It translates 66 books of the King James Version of the BibleÂ into emojis, including stories of Abraham, Noah, and Jesus.

The app is currently only available for iOS. “The translator welcomed suggestions on how to improve the translation. Though the [developer]Â wanted to make the Bible available for Android, the book formats used by each platform presented problems. Like Amazon, for instance, doesn’t support emoji,â€ reports The Guardian.

The use of technology for religious purposes particularly resonates with African Americans. Black Enterprise‘s senior editor, small business, Carolyn Brown, cited a study from AT&T which revealed African Americans are more likely than the general population to view technology as playing a positive role during church service.

Bible Emoji is available on iTunes for $2.99 and is supported on iPhone, iPad, iPod Touch, and Mac.