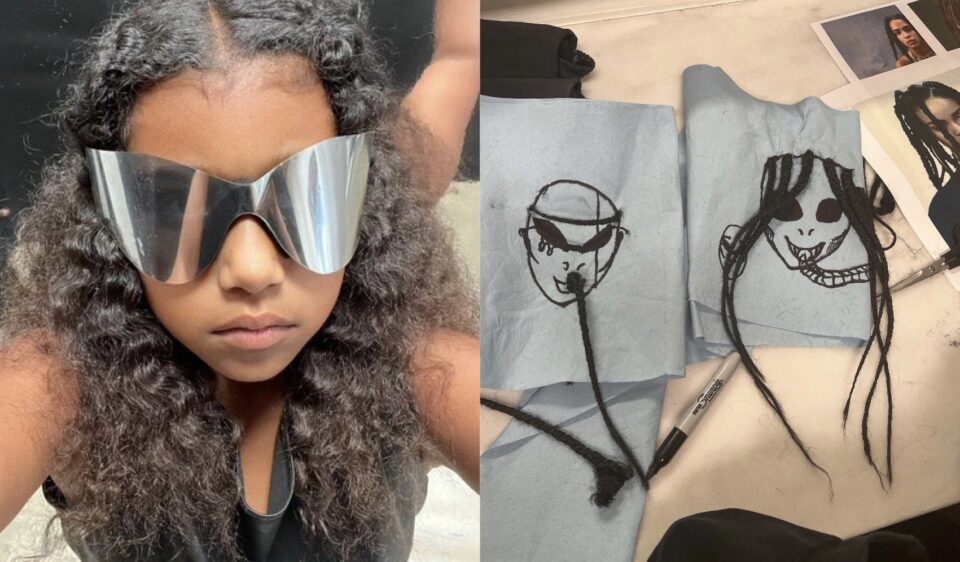 North West is slowly but surely reaching icon status at the tender age of 9.

In one picture of the recent design studio visit, North admires her work — an alien-like figure drawn on light blue fabric, equipped with black shades and a braid sticking out like a tongue.

Another sketch can be seen peeking out behind that one with the same type of alien figure, embellished with braids coming out its head.

A second post of the talented North’s artwork offers a better view of the braided alien sketch, with what seems to be a snake-like tongue coming out its mouth.

A third picture Kardahsian shared appears to be North modeling the very glasses in her sketch, which are actually part of her dad’s collection, the YR 3022 YEEZY SHDZ.

During a February video tour of the Kardashian’s Calabasas home for Vogue, the mother of four proudly showed off some of the impressive pieces North has gifted her mom along the years.

She exhibits the skillful works, as she describes what they are, until one self-portrait catches the eye. A charcoal sketch North created looks identical to the sketches she made of the alien-like figures for Yeezy.

“Recently, North stayed home and had COVID, so this is her drawing that she did in her room,” Kardashian reveals. “It’s a charcoal. Maybe that was just her emo mood. So I love seeing like the personality, and the moods, and everything that she goes through, and is feeling, it’s really been an amazing hobby of hers.”

North recently made headlines after her visit to Paris Fashion Week alongside mom, where she seemingly stole the show not only for her evocative style — specifically the matching nose chains with her mom at the Jean Paul Gaultier haute couture fall/winter 2022–23 show — but for calling out paparazzi for getting on her nerves.

Move aside mom and dad, North is THAT girl.