Lupita Nyongâ€™o is Named Glamour's Woman of the Year 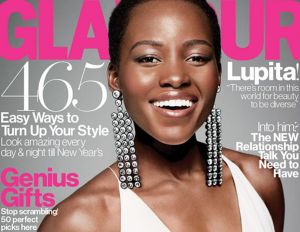 Glamour has named Lupita Nyonq’o as its ‘Woman of The Year.’ Earlier this year, she made a Vogue cover as well. She’s been on a rise since her role in 12 Years a Slave.

Nyong’o won an Academy Award for her first role in 12 Years a Slave; was named a new face of LancÃ´me; made the cover of People‘s Most Beautiful issue; and has key roles in two upcoming films, The Jungle Book and Star Wars: Episode VII.

She did tell Glamour how her life has changed, ‘I did have a dream to be an actress, but I didn’t think about being famous. And I haven’t yet figured out how to be a celebrity; that’s something I’m learning, and I wish there were a course on how to handle it. I have to be aware that my kinesphere may be larger than I want it to be.’