Managing Motherhood While in School - Page 2 of 2 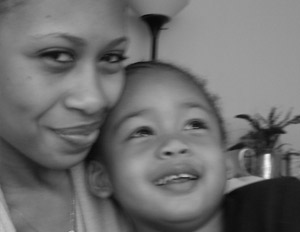 Going away to college was an option at first but after I had Jordan and was able to interact with him and raise him, it wasn’t an option any longer but [staying in New York for school] was hard. I lived in Westchester and my school [Pace University] was in Manhattan. I was coming home to him and being a mom, and putting him to bed to do whatever homework and studying I needed to do. Then, I was waking up at 5 o’clock in the morning to get myself and Jordan ready to go to the babysitter and catch my bus by six to make it toÂ Manhattan by eight and go back to school–it was very tiring.

In 2009 I started at Pace with a major in psychology and communications. College wasn’t what I expected. I don’t know if it was because I came from a Catholic all girls’ school or if I was just expecting too much from college, but I expected it to be more of a challenge. Academically it just wasn’t enough for me and, maybe a semester and a half in, I decided that I was going to drop out, start working and take my classes online instead. This way I wouldn’t have to ask anyone for help. So I started my online courses with Penn Foster for health information technology, while working for Ricky’s.

I started my program in June 2010 and the first semester went by really quickly. By that time I had moved out on my own and was living in Co-Op City in the Bronx. I enjoyed being able to move at my own pace I didn’t have to slow down and wait for other people to catch up or be the one that was slowing everyone down. Right now I’m only a semester away from finishing this degree but then I’ll be back for a bachelors in psychology. I’m going to give myself less than three years to finish that but it’s difficult now that my son is older and getting into everything. It’s a little more difficult to sit down at night and really focus on what I’m trying to do so I have to wait until he’s sleeping.

When you become a teenage mother–or a parent–you have to understand there are certain things you have to give up and just can’t do anymore. Even though I wasn’t the party type, I already knew that teenage life was done with and I was okay with that. I had a responsibility, I had priorities–my son comes first then me. A lot of teen moms don’t get that. Some think that once they have the child everything is going to be the same–they can still go out, they can still party… When you decide that you want to have a child and that you want to be a mother, there’s a certain lifestyle that you have to live and running the streets isn’t a part of it.

My advice to other single moms in school is to just believe in yourself despite what everybody is going to tell you. They’ll tell you that you can’t do this and you can’t do that–it’s not true. I’ve heard so many, ‘I can’t’ and ‘You can’t’ and once you do it everyone’s mouth is either hanging open or they have absolutely nothing to say. A month ago, I spoke to my dad’s mother and she told me, ‘You know what, everybody is so proud of you, you turned out to be such a good mom and doing everything for yourself.’ That really made me happy.

An old friend from elementary school told me I was an inspiration and I was shocked. I didn’t expect her to say that and it made me cry and it was empowering. It made me want to do even more and just show whoever doubts that it can happen. There’s no reason why you can’t do what you want to do or succeed. You don’t have to be living off the system, you don’t have to be running the streets.â€

As told to Kahliah A. Laney