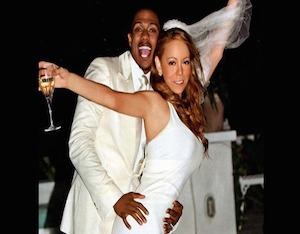 Has Nick Cannon’s confessional cost him his marriage to Mariah Carey and shared property?

Less than 24 hours after his candid admission, TMZ has released word that the two superstars are indeed strained and Carey is looking to silence Nick from speaking out about their impending divorce.

Reports have come out from the gossip hounds that the couple’s six-year marriage has hit a rocky patch when Cannon, 33, confirmed that there was trouble in paradise. To circumvent the press from getting a hold of further gossip, Carey had her lawyers prepare a confidentiality agreement, which, according to TMZ, bars Cannon from sharing details of their relationship.

If he violates the juncture at any time, Cannon could face “severe financial penalties.”

The “America’s Got Talent” host has been effectively muzzled by his ex-wife-to-be with Mariah retaining rights to announce the split on her own terms. Cannon has already begun to follow suit, as in his recent interview with “The Insider” found a less conversational Â Cannon only confirming that the duo are living separately, refusing to discuss other details.

Choosing to focus on his three-year-old twins – son Moroccan and daughter Monroe – Nick posted a video to his Twitter account where he accepted the ALS Ice Bucket Challenge in nothing but a towel. He originally promised to enact the charitable deed in the buff, but compromised with the wrap around his waist.

Reports are that the celebrity couple separated in May of this year and have been working out a property settlement and custody agreement in secret. But what was the cause of the split? It seems that Cannon is to blame, as his reflections on past lovers has angered his wife, Carey.

“Mariah has had several closed door meetings with divorce lawyers,” a source told In Touch Weekly. “But Nick’s being more passive. He’s less inclined to pull the trigger, perhaps because of the kids. He’ll definitely wait for Mariah to file for divorce, but he won’t go down without a fight. He wants a chunk of her $500 million fortune.”

Aside from the children, the feuding pair share four lavish homes in New York, Los Angeles, Aspen, and Windermere Island in the Bahamas.