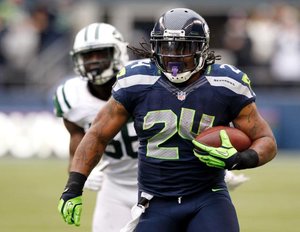 Seattle Seahawks running back Marshawn Lynch has a roller coaster relationship with the press. For most sports reporters, Lynch has been a challenge to interview. And, the NFL has continued to slap Lynch with massive fines for his decision to not directly answer questions from the media. Previously, he was fined $50K by the NFL for not fulfilling his media duties. Some of his Seahawks teammates like Richard Sherman and Doug Baldwin have publicly expressed their displeasure with the league for penalizing Lynch. Sherman has even called the NFL’s rule hypocritical.

Most recently, Lynch opted to appeal the NFL for the organization’s verdict to fine him $100,000 from earlier this season for not talking to the media, reported ESPN. On Jan. 8, outlets started reporting that Lynch lost his appeal to the NFL. In Lynch fashion, he didn’t comment on the matter, but his agent Doug Hendrickson had something to say. “[Marshawn Lynch] will keep speaking the truth on the field…old school, throwback, warrior, best in league. 100K for not talking…joke…,â€ the obvious annoyed Hendrickson wrote on Twitter, after the decision was reported.

As of 2014, Lynch has paid $200,000 in fines to the league for not conducting interviews with the media. The NFL’s media policy requires that players must be available during the week and in the locker room following all games, according to the Associated Press.

In the past, the NFL has fined coaches and players for not following the league’s media policies. Back in 1991, Buffalo Bills coach Marv Levy was slapped with a $5,000 fine for missing the Super Bowl media day. In 2003, the Oakland Raiders were penalized for $50,000 as a for not making all the players and coaches accessible for a mandatory press session. Other players have been fined for skipping media appearances at the Super Bowl, for example, New York Giants defensive end Osi Umenyiora lost $20,000 from his 2012 salary. That year, he had $6.5 million contract with the Giants.

What do you think about the NFL penalizing players and coaches for not cooperating with the media?