INFOGRAPHIC: The Money Behind Mayweather-Pacquiao Bout 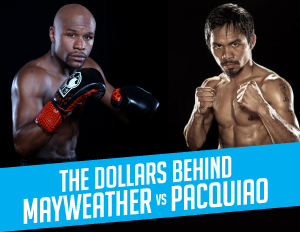 This weekend’s bout between Floyd Mayweather and Manny Pacquiao isn’t just one of the mostÂ anticipated boxing matches of all time—it’s also poised to rake in more money than any other fight in history and to break all sorts of records in the process.

Revenues from the pay-per-view alone could come in at around $300 million with an estimated 3 million people expected to buy the broadcast at a record cost of $99.95 to see it in high definition. If the estimates hold, those will also be records for PPV buys and revenues. The expected haul from the foreign broadcast rights adds another $35 million.

[Related: Mayweather v. Pacquiao: All Aboard The Money Train]

Those are just a few of the eye-popping financials surrounding this fight. Take a look at how the match breaks down, blow for blow and dough to dough:

FacebookTwitterYoutube
← Mayweather or Pacquiao? Celebrities Weigh In ← Our Perspective
×