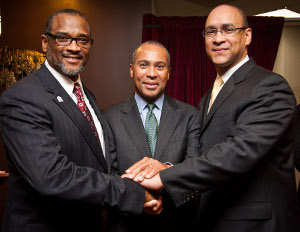 The successful applicants will join a network of more than 30 MBDA Business Centers across the United States and Puerto Rico.Â  Grant amounts will range from $300,000 to $500,000 per year for a three-year cycle.

The primary objective of the business centers is to provide strategic consulting services to minority-owned firms that will result in the creation and retention of jobs for Americans through business growth. MBDA Business Centers have had notable success in increasing public and private sector contracts and capital investments obtained by minority-owned firms. Successful applicants to this grant competition are also expected to foster global business expansion by promoting export opportunities.

The MBDA Business Center program is not a grant program to start or expand an individual business. Applicants must be able to operate a business center and provide business consulting services to eligible minority-owned firms as set forth in the Announcement of Federal Funding Opportunity. Applications that do not meet these requirements will not be considered by MBDA for funding.

The MBDA helps to create and maintain jobs by supporting the growth and global expansion of U.S. minority-owned businesses. In Fiscal Year 2012, the MBDA helped create and retain over 16,000 jobs, the highest level in the 44-year history of the agency, and helped their clients obtain over $3.6 billion in contracts and capital awards.

“The MBDA Business Center program is critical to furthering the Agency’s mission in assisting minority-owned businesses in gaining access to contracts, access to capital, and access to markets,â€ said David A. Hinson, MBDA National Director. “It is our goal to ensure the continued success of minority-owned firms who, in turn, strengthen the economy and create American jobs.â€