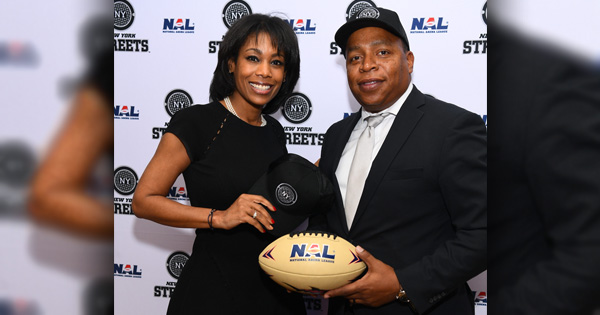 Brooklyn natives Corey and Tamara Galloway dreamt of owning a professional sports team in New York City. And they made that dream come true while making history as the owners of the National Arena League’s New York Streets—a franchise football team. The Galloway’s are now a part of a small group of African Americans who own their own professional sports team.

According to BlackBusiness.com, Corey Galloway is also the founder of a New York-based business development and direct investment company Legacy Growth Partners. He is also an avid football fan who travels all over to attend games and football practices.

Attending games regularly inspired Corey to seek ways that he could be more involved in the business side of the sports industry.

Being a black American, the Galloways experienced a number of problems while developing New York Streets due to the severe lack of representation in the industry as well as people doubting them. People even asked where their money came from. However, these negative experiences didn’t discourage the Galloways. In fact, they hope to pave the way for more black Americans to own sports teams.

“For me, as a football fan, as a football player, I acknowledge that there is a barrier of entry that’s created with ticket pricing. Not everyone is able to really enjoy the game and see the games live and upfront. So, creating that opportunity and being able to provide them with an option to see a game live—I’m just excited that those kids will be able to enthusiastically say ‘Oh, wow! I’m going to a game!’” Corey told Black Business News.

The Galloway’s have the support of colleagues and friends including football player Devale Ellis. Last year, the New York Streets played their first game at Westchester County Center in White Plains, New York.