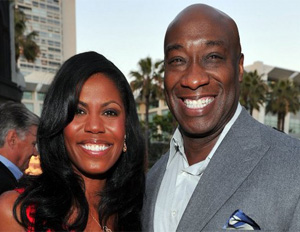 Before his untimely death, actor Michael Clarke Duncan had plans to marry his girlfriend Omarosa Manigault in January.

Duncan was engaged to the former Apprentice winner.

The couple had recently begun planning the wedding when Duncan suffered cardiac arrest on July 13th. Omarosa resuscitated Duncan using CPR and saved his life. She was able to give him another month of life before his death on September 3, 2012.