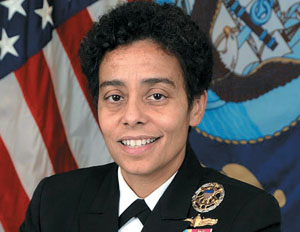 The Navy announced Tuesday morning its promotion of Michelle Howard from vice admiral to admiral, making her the first female four-star admiral and first African American to hold this position.

In her promotion ceremony held at the Women in Military Service for America Memorial at Arlington National Cemetery, Howard paid tribute to the nation’s service members, as U.S. Navy Secretary Ray Mabus applauded her latest accomplishment as a sign of how far we’ve come.

“She is also a great example of how much we as a nation and a Navy lose if we put artificial barriers in,â€ Mabus told the crowd. “If we don’t judge people based on their ability, based on their capability. I hope I have always been passionate about that, but I know the intensity has increased since I am the father of three daughters, and I refuse to believe that there are any ceilings for them, glass or otherwise.”

Prior to her latest accomplishment, Howard was the first African American woman to serve as a three-star officer in the U.S. military and command a U.S. Navy ship. Howard’s accomplishments have also been honored at the NAACP Image Awards, as she was a 2013 Chairman’s Award recipient.