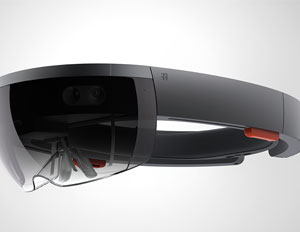 HoloLens isn’t going to be something you buy to mess around with, at least not yet. In the demo, Microsoft showed it off in business environments, with scientists using it to study rocks on Mars and 3D modelers using it to design gas tanks for motorcycles.

But early adoption of technology like this looks great for businesses who want a leg up against the competition. Imagine using HoloLens to “tryâ€ furniture in your home before you buy? The interactive experience could lead to more user engagement, more sales, and even more word-of-mouth about how your business lets you try before you buy with holograms.

It could revolutionize gaming as well. The company showed off a demo of Minecraft, the game Microsoft purchased (along with its developer, Mojang) for $2 billion. The new level of interactivity makes it a much-needed infusion of creativity and excitement into its entertainment division, which has been lagging behind Sony and its PlayStation 4 console.

Microsoft’s announcement of its new HoloLens was accompanied by Windows 10, its upgrade to the current Windows 8 operating system.

Windows 10 is different, as its destined to become Microsoft’s unified platform for all of its devices. That includes tablets, desktops, smartphones, and even its Xbox console. With one operating system running on all platforms, it could streamline Microsoft and how it sells products to consumers and businesses, and help spur adoption of technology like HoloLens.

Could HoloLens be the same sea change in computing that the iPhone was to mobile phones? Possibly. But right now, it’s still a concept. A very cool concept. Check out a video of HoloLens below.