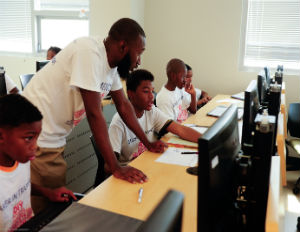 The week of July 13 launched Minority Male Makers, a 2-year program developed by Verizon, which aims at giving minority middle school boys hands-on learning experiences with advanced technology, opening their eyes to the professional possibilities that STEM combined with entrepreneurship skills can offer. The program aims at empowering a new generation of minority men by giving them lifelong technology and entrepreneurship skills.

Morgan State University is one of four leading HBCUs directing this pioneering program, instructing the students daily during intensive, daylong technology classes on campus this summer. The students will also be partnered with minority college men as mentors, in collaboration with the National CARES Mentoring Movement.

[Related: How One Organization is Changing the Trajectory for Young Black Men in Maryland]

This summer, students participate in workshops four to five days a week for approximately four weeks at Morgan State University. The program started July 6 and ends July 31. Morgan’s curriculum focuses on skills such as collaboration, critical thinking, problem solving; along with a range of STEM disciplines, such as app design and development, computer programming, basic coding, modeling, 3-D design, 3-D printing, and robotics. During the 2015—2016 school year, the students are to participate in check-in sessions one to two times a month, which are expected to include mentoring and academic support.

The program’s impact will be measured by a combination of pre- and post-tests administered at various stages of the program. Changes in student performance on standardized and achievement assessments will also be tracked.

Minority Male Makers has been in development at Verizon for more than a year. Minority males are severely underrepresented in STEM fields (National Science Foundation) and are less likely than Caucasian peers to graduate from high school in four years (The Schott Foundation) or to pursue college (National Center for Education Statistics). In recent years much attention has been paid to empowering girls in STEM, but few programs work specifically with boys to spark their interest in STEM disciplines.

For more information, go to www.morgan.edu; for information about the Verizon Foundation, visit www.verizon.com/about/responsibility.