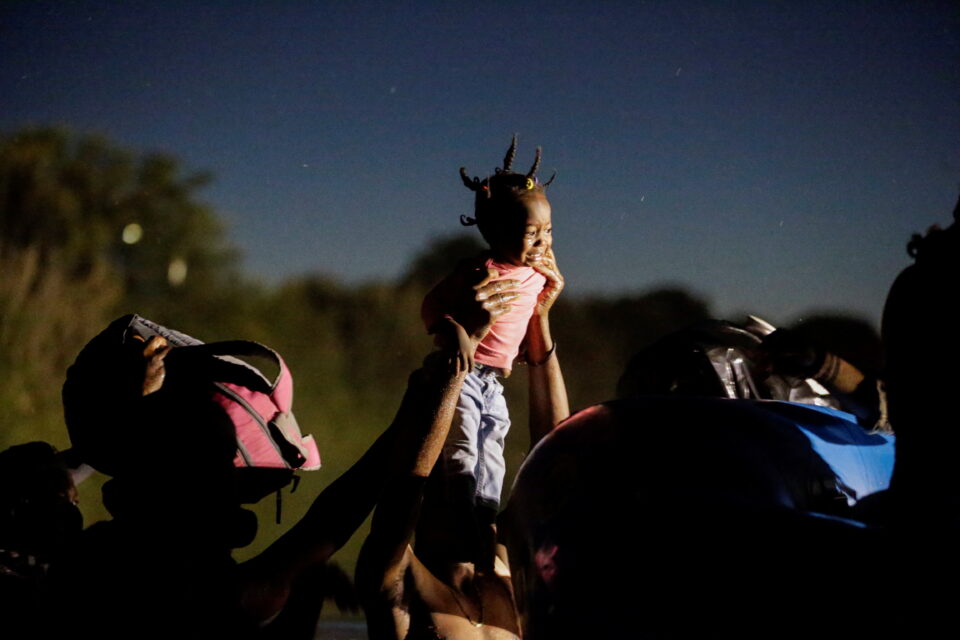 Migrants seeking refuge in the U.S. and crossing the Rio Grande river towards Del Rio, Texas, U.S., hold up a girl to be helped by Border Patrol Agents on an inflatable boat, as seen from Ciudad Acuna, Mexico, September 23, 2021. REUTERS/Daniel Becerril

Reuters – Only a few hundred mostly Haitian migrants were left camping out under an international bridge in Del Rio, Texas on Friday, down from nearly 15,000 people who had converged there last week as U.S. officials ramped up expulsions to Haiti and some releases into the United States.

Val Verde County Judge Lewis Owens, who has been keeping tabs on the number of people in the camp, said there were 225 people left under the bridge that connects the United States and Mexico on Friday morning.

The U.S. Department of Homeland Security (DHS) did not immediately respond to a request for comment but on Thursday evening had said there were 5,000 people currently in the Del Rio border sector, which would include people who had been moved to federal facilities for immigration processing.

Reuters photos and videos of the camp show camping tents pitched closely together and some shelters made out of sticks and tarps.

Haitians have also set up camp on the Mexican side of the border in Ciudad Acuna, as hundreds retreated back across the Rio Grande after U.S. officials began sending planes of people back to Haiti.

Mexican officials urged Haitians to give up hopes of seeking asylum in the United States telling them instead to return to Mexico’s southern border with Guatemala to request asylum in Mexico.

U.S. President Joe Biden has faced strong criticism in recent days over the expulsions to Haiti. Rocked by the assassination of its president, gang violence and natural disasters, some 1,401 Haitian nationals have been sent back to Haiti on 12 repatriation flights since Sunday, September 19. The Caribbean island is the poorest in the Western hemisphere.

On Thursday, the U.S. special envoy to Haiti quit in protest over the Biden administration’s deportations of migrants to the Caribbean nation,

That followed widespread outrage stirred up by images of a U.S. border guard on horseback unfurling a whip-like cord against at Haitian migrants near their camp.

Most migrants arriving at the U.S.-Mexico border can be summarily expelled under a public health order known as Title 42 that was put in place at the beginning of the coronavirus pandemic early last year.

But hundreds of other migrants, deemed particularly vulnerable or otherwise not eligible for Title 42, have been allowed into the United States to pursue their immigration claims in U.S. court. Still others may be transferred to immigration detention, though DHS did not provide a breakdown of the diverging fates of migrants who had recently arrived in Del Rio.

On Friday, more than a hundred migrants were dropped off at a center welcoming migrants in Del Rio, according to a Reuters witness. From there most head to other destinations in the United States to reunite with family members.

Yet pressure is also growing on Biden to tighten the border, and Mexico’s National Migration Institute (INM) is starting to return migrants to the southern Mexican city of Tapachula so they can file asylum applications there.

“We’re not taking them out of the country,” INM chief Francisco Garduno told Reuters. “We’re bringing them away from the border so there are no hygiene and overcrowding problems.”

Haitians who made the perilous, costly journey from Guatemala to Ciudad Acuna on the Mexico-U.S. border are skeptical about the merits of going back to a city where they had already unsuccessfully tried to process asylum claims.

Willy Jean, who spent two fruitless months in Tapachula, said if Mexico really wanted to help the migrants, it should allow them to make their applications elsewhere.

“Tapachula’s really tough, really small, there’s lots of people,” he told an INM agent trying to persuade him to go south. “There’s no work, there’s nothing.”

Official data from Mexico show Haitians are already far less likely to have asylum claims approved in Mexico compared with many nationalities, even if their chances are starting to improve.

Last year, of all asylum claims that were formally resolved, only 22% of Haitian cases won approval, compared with 98% for Venezuelans, 85% of Hondurans, 83% of Salvadorans and 44% of Cubans. So far this year, the Haitian number is up to 31%.

Asylum requests have overwhelmed Mexico’s Commission for Refugee Assistance (COMAR), which is scheduling appointments months away, if at all. Some Haitians in Ciudad Acuna said they had left Tapachula because they were so fed up with waiting.

“It basically pushes Haitians out,” said Caitlyn Yates, a migration expert at the University of British Columbia.

Soggy papers discarded in the grass near the Rio Grande showed that a Haitian man who applied for a humanitarian visa in August would have had to wait until December for an appointment.

Telling migrants eyeing the U.S. side of the border that it would be better to process claims before the media disappeared from Del Rio and Ciudad Acuna, INM agents swept through the camp on Thursday beseeching them to go back to Tapachula.

“We’re giving you this option,” INM official Montserrat Saldana told a cluster of migrants circled around her. “All of you who cross the river are going straight to Haiti.”