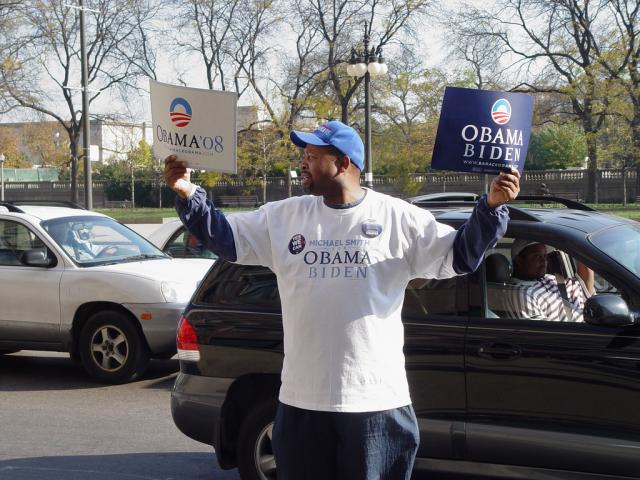 It’s a gorgeously sunny day in downtown Chicago and Michael Smith, a Carpenters Union steward, and two other volunteers, are standing on the corner of South Michigan and Van Buren, enthusiastically handing out flyers, holding up signs at drivers in the oncoming traffic, and reminding prospective voters emerging onto the sidewalk from the subway to be sure to vote for Barack Obama.

You can tell they’ve been doing this for a long time and are having a grand old time. A bus driver sporting a big grin honks at them, pumping his fist up and down in encouragement. As he pulls up to the subway entrance, the driver opens his door to shout, “You need a bigger sign!â€

Only a few people reject the campaign materials; most accept them gladly, reassuring Mike that they’ll be at the polls on Tuesday and “Yes, we can!â€ they say. One guy who just came in from Indiana warns the groups that Obama signs are mysteriously disappearing from yards in his neighborhood.

Unlike Joe the Plumber, whom Mike thinks is a fraud, he’s been engaged in the political process for years now. He volunteered for Obama during his U.S. Senate run and now spends as much time as he can now to help make this bid for the White House successful. He also two months in Iowa last summer with the Obama Fellowship Program to help organize that state, as well as Indiana and Illinois — what he calls the “I triple threat.â€
Much has been said about Obama’s organizational prowess and Mike can personally testify to that. “It’s one of the most well-oiled machines, filled with staff, supporters, precinct captains and team leaders.
People just have a lot of energy,â€ says Mike. “Barack is grassroots.
When he finished Harvard, he didn’t go for the six-figure job. He came back to the community to reach out and help people with job losses and health care and other issues that touch home.â€ Mike says Obama knows that a president’s No. 1 job is to help individuals and that’s what he believes Obama’s proposals will do.

So, until the polls close tomorrow, he’s spending every possible minute helping to get out the vote. And at the end of the night, he wants to be able to say, “Mission accomplished.â€
Joyce Jones is reporting from Chicago for blackenterprise.com