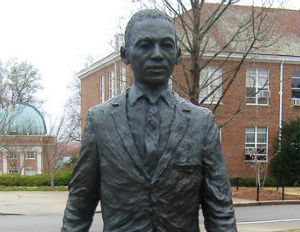 According to new documents and reports, University of Mississippi student Graeme Phillip Harris has been charged with a federal civil rights crime. In addition, Harris has been indicted on one count of conspiracy and one count of using a threat of force in hopes of intimidating black students.

The FBI states that Harris, along with three other students,Â conspired to hang a rope around the neck of the James Meredith statue on the campus. Harris and the other students allegedly did this under cover of darkness by using an outdated version of the Georgia state flag, which depicts the Confederate battle flag. James Meredith, the university’s first black student, integrated the university in 1962. The FBI is continuing the investigation, as the defendant is considered innocent until proven guilty.

U.S. media sources have reported that the three other students involved were members of a fraternity; as a consequence they have been expelled and the fraternity chapter has been suspended.

This is the latest in a number of instances of racist behavior on college campuses. Recently, students at the University of Oklahoma led a racist chant by members of their college fraternity that went viral online.

Attorney General Eric Holder stated, “This shameful and ignorant act is an insult to all Americans and a violation of our most strongly held values. No one should ever be made to feel threatened or intimidated because of what they look like or who they are. By taking appropriate action to hold wrongdoers accountable, the Department of Justice is sending a clear message that flagrant infringements of our historic civil rights will not go unnoticed or unpunished.â€

What do you think about this incident? Share your thoughts with us below.

NFL to Hire B. Todd Jones as Disciplinary Officer