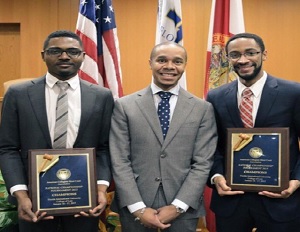 Thanks to its Moot Court Team, the prestigious Morehouse College is making history once again.

Taking the title as the first HBCU to win the National Moot Competition, Morehouse students Rodje Malcolm and Emanuel Waddell, along with respected attorney and Moot Court team coach Winfield Murray, have led their school to victory as the only HBCU to compete at the national level against well-seasoned and well-funded teams across the nation.

At the November 2014 American Collegiate Moot Court Association South Atlantic Regional Tournament at the University of Central Florida, Morehouse’s team won every single match and unseated the national champion Patrick Henry College. The competition’s final set of judges included actual judges from both the state and federal level who expressed they had never seen a group of students who had such an intense understanding of case law, judicial precedent and legal reasoning.

November’s event served as the second year that Morehouse participated in the competition and their outstanding performance scored them an invitation to the 65th Annual National Moot Court Competition hosted by the New York City bar on February 9-12, 2015.