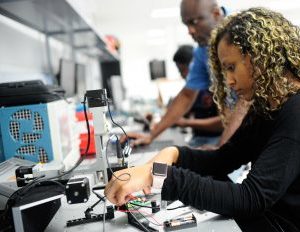 Morgan State University, a historically black college in Baltimore, has announced the award of a three-year $750,000 grant from Intel Corp. The grant is part of the Intel HBCU Grant program announced last month, which is part of the tech giant’s Diversity in Technology Initiative which began in January 2015.

Morgan State is one of six prominent HBCUs included in the grant program. The others:

The chair of Morgan’s Department of Electrical and Computer Engineering, Craig Scott, Ph.D., is the grant project’s director and lead contact.

“With the future success of our nation firmly rooted in the expansion of a workforce prepared in STEM, we are pleased to have this opportunity to partner with one of the foremost names in technology in meeting that need,” Morgan President David Wilson is quoted as saying in a statement. “This initiative, which is consistent with Morgan’s overall mission, furthers our status as a top producer of African Americans with engineering degrees and places the University in an even stronger position to introduce more students to the opportunities of the future—opportunities that require a background in STEM.”

According to the National Center for Education Statistics, only 11% of STEM majors are black. The Intel grant will help the six participating HBCUs to increase the number of black students who graduate with STEM degrees by providing multi-year investments in computer science, computer engineering, and electrical engineering programs.

“It’s going to support 25 two-year fellowships for students at Morgan, and … allow us to start a one-year professional master’s program,” Michael Spencer, Ph.D., dean of the Clarence M. Mitchell Jr. School of Engineering at Morgan, is quoted on the WBAL TV website.

“We are pleased to include Intel among our growing number of partners dedicated to seeing more diversity in the field of technology,” Spencer says in a statement. “This collaboration allows the University to advance its mission of developing talented engineers and scientists in historically underrepresented in STEM fields.”