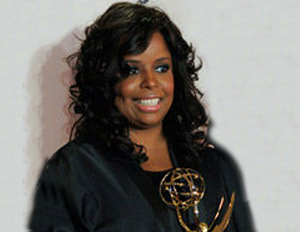 You’re now working over at Oprah’s OWN network as the musical director of The Rosie Show. What’s a typical day like for you?

Since it’s a new show the hours are pretty long because we are setting everything up. But right now it could go from rehearsing with Javier Colon to working on the opening musical number or game shows. I’m having to write a lot of the music because they just added a band recently. So we’re going to be playing in and out of commercial and they haven’t got a theme. A lot of music has to be written. But viewers can expect a lot of funky beats.

Have there been any hurdles you’ve faced as a woman or African-American in your field?

I definitely think there are hurdles as a woman, but it’s nothing I don’t think I can handle. The images for Black women have been so bad for the past 10 to 12 years in entertainment. No one is going to think when you walk in the door, “Oh, yes, she can write our concerto.â€ There have been moments where I definitely had to prove I can do the job. There have been elements of doubt I’ve experienced. Then I do the job and it’s erased. I definitely feel I’ve had to work harder–that’s a good thing. I like working. I like things being right.

While your career was progressing you also dealt with personal tragedy in the form of breast cancer. How were you able to deal with that not once but twice?

When I first got the news at the doctor’s office in 2000, because I was such a health nut, I had jelly legs. I couldn’t even walk home. I was in such shock that it could happen to me, somebody who was pretty much on top of her health. I was in shock for a couple months. I went into the mode of studying and researching. Sometimes I would spend up to four hours a day finding a way to beat it without the harshness of chemotherapy and radiation.

Ultimately, why did you opt out of chemotherapy and radiation?

I did alternative therapy. All I can say is that intuitively if I did it [chemotherapy] at that time in 2000, I would have not survived it. It was just an intuitive thing. Everybody has to be sure of their own personal decisions. In my head there was nothing else but not to do that. When it returned in 2002 I chose a different form of therapy.

How do you feel as a survivor, knowing you beat this thing twice?

I think breast cancer was a bigger challenge than being a musical director. But after I beat it I can definitely say there’s a part of me that says, “Everything is pretty much easy now. Survival definitely consists of taking care of yourself in ways I probably didn’t do when I was working hard. Like proper rest, diet, supplements… I even find in the past month starting at this show I’ve been neglecting a lot of my supplements. After the premiere I’m getting back on it. But it’s easy to forget that stuff when you’re working hard.

Do you have any tips for women and/or men of color who would like to follow in your footsteps?

I would definitely say if you’re a musician learn to read music, learn all different styles beyond just soul music, R&B and hip-hop. Learn anything you can from cacao to classical to rock. Just keep learning because you never know what gem is going pop up as a gig. For example, as a kid I used to play a lot of Scott Joplin. When I was on SNL there popped up this sketch where Maya Rudolph played Scott Joplin in the sketch. I would have never thought years later I’d be using those chops for that moment. You just never know.

Follow what you love, follow the music you love and learn as much as you can. Sometimes it’s not enjoyable to learn things even if it’s an hour to learn to read and notate and arrange. Whatever it is just do it. No one’s going to make apologies for you in the big league moments. They’re going to say, “Oh, no, she or he can’t do that.â€