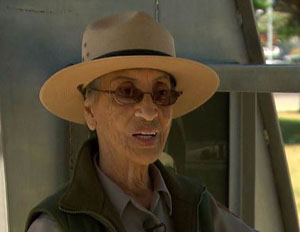 NBC’s Today show recently profiled 93-year-old Betty Soskin, the oldest park ranger in the nation. She began her new career with the National Park service at age 85 and is assigned to the Rosie the Riveter/World War II Home Front National Historical Park in Richmond Calif.

According to the Today show, tourists signed up months in advance to have Soskin escort them on a guided tour through the historical park, that highlights the history of working women during World War II similar to Â Soskin, who also worked during World War II as a clerk in a segregated union.

“She brings a perspective that nobody else could give,â€ said one park goer to the Today show.

Watch her interview on the Today show below: