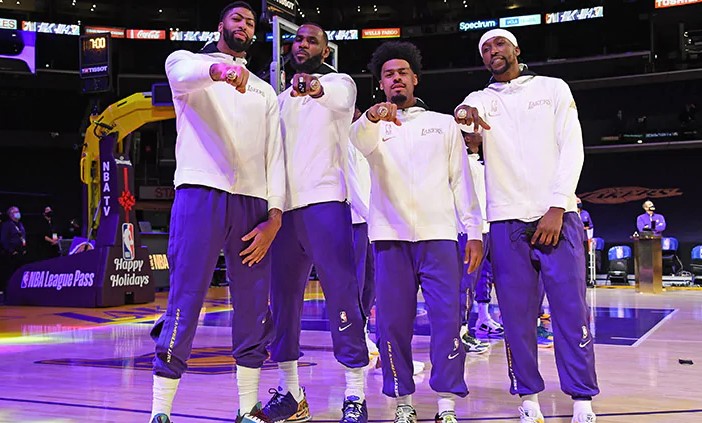 The National Basketball Association (NBA) has opened up for business for the 2020-2021 season. On Tuesday, December 22, the current NBA champions, the Los Angeles Lakers faced off against the Los Angeles Clippers in the first game of the season for both teams. It was at the start of this game that the Lakers’ players each received their championship rings.

The rings also included a tribute to Los Angeles Laker legend, Kobe Bryant, who was killed in a helicopter crash earlier this year.

According to the Los Angeles Lakers, “each member of the 2020 Championship Lakers team is receiving a ring that has more carats of diamonds than any other ring in NBA History.” The championship rings each have a complete total of 804 stones and 15.50 carats of white and yellow diamonds. Another .95 carats feature Lakers purple Amethyst stones. The ring is also complete with 16.45 carats of stones and approximately 180 grams of a signature batch of 14 karat yellow gold.

In homage to Bryant, each ring has a number that has a Mamba snake behind it and there is a removable top that reveals all the retired Los Angeles Lakers jerseys with a special emphasis on the two Kobe Bryant retired jerseys.

This is what Jason Arasheben, aka Jason of Beverly Hills, the jeweler who designed the rings, told ESPN”

“We created a removable top that exposes the rafters that are up in Staples Center with [jerseys of] all of the retired Laker greats, with a special emphasis put on Kobe’s No. 8 and No. 24 jersey, and it’s set on a snakeskin-texture background.

“This ring eclipses last year’s NBA championship ring as the most valuable NBA championship ring in history with the most amount of diamond carat weight than any other ring in history,” Arasheben said. “I mean, this ring, we really wanted to make a statement. It’s been 10 years since the Lakers have won. We wanted to come out and really make a statement and really reward these players for a job well done.”