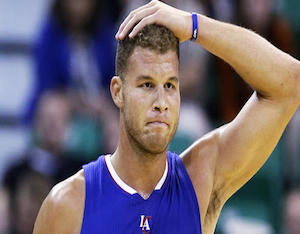 Fresh off of an 89-85 lost to the San Antonio Spurs, Los Angeles Clipper power forward Blake Griffin has some off-the-court troubles. According to the Los Angeles Times, Griffin, 25, has been charged with one count of misdemeanor battery in connection with an incident last month at a Las Vegas nightclub.

Filed in a Las Vegas Justice Court on November 5, Griffin allegedly squeezed the hand and shoulder and/or slapped Daniel Schuman, 39, in the face. The situation occurred in the wee hours of October 19 and involved the use of a camera at Tao nightclub in the Venetian resort, according to a Las Vegas police spokesman.

Schuman has refused to comment about the incident until he meets with an attorney Saturday. The Los Angeles Clippers did not practice Wednesday and a team spokesman declined to comment about the case. Speaking on behalf of Griffin was Clippers Coach Doc Rivers, who said he trusted his player “100%” last month when the Las Vegas police began investigating the matter.

The Clippers power forward’s initial court date at the Regional Justice Center in Las Vegas on December 8, but will not be required to attend the hearing. Reason being that on the same day, the Clippers play the Phoenix Suns at Los Angeles’ Staples Center. According to the law in Nevada, a misdemeanor battery carries a range of possible penalties, including six months of jail and/or a $1,000 fine or community service in lieu of jail time.