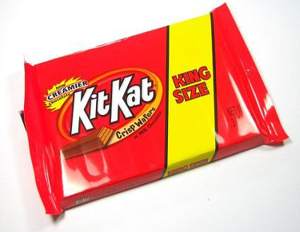 United Kingdom-based chocoholics will likely have an extra special treat included in their NestlÃ©’s Kit-Kat bar.

The candy maker has announced it is placing a GPS tracker inside four versions of Kit-Kat bars across the pond as part of its “We Will Find You Campaign.â€ The select bars, which hit shelves earlier this month, include Kit-Kat 4 Finger, Kit-Kat Chunky, Yorkie Milk and Aero Peppermint.

While the candy bar will appear like a regular Kit-Kat, the navigation device can be found inside the wrapper. When select NestlÃ© customers unwrap their candy bars, the GPS device will activate, alerting NestlÃ©. Â A “prize teamâ€ will then locate the winner within 24 hours and hand him or her a check for Â£10,000 (the equivalent of $16,000). The six winners must return the devices upon retrieving their prize, according to NestlÃ©’s terms and conditions.

NestlÃ©’s latest campaign is geared towards men, who are thought to rely heavily on navigation devices. The Swiss company is supporting the marketing efforts with television ads and a smartphone campaign where users are directed to scan QR codes on Kit-Kat ads or use NFC-equipped phones to enter an online competition. The snack company will be awarding an additional number of prizes online via Facebook. Those winners will be notified immediately through an on-screen pop-up message and by email one working day from prize verification.

With 150 Kit-Kat bars consumed worldwide every second, imagine how much consumer data can be transferred to NestlÃ© headquarters. We reached out to NestlÃ© UK for comment, but they did not disclose their plans for the data aggregated.

Will NestlÃ© bring their GPS tracking ways stateside? Tell us what you think about the company’s decision to sell GPS-enabled candy bars in the comments section.