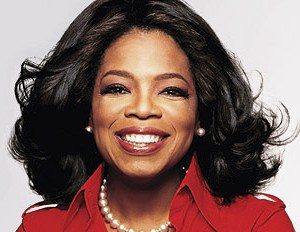 Since beginning her career as a newscaster in Tennessee, followed by her emergence as a television personality in Chicago with her namesake TV show debut in 1983, Oprah has become an inspiration for audiences around the world.

Her message–to live one’s best life–has empowered readers and viewers for decades, and Oprah has translated that message into her own personal brand and a media empire. The best way to tell Oprah’s story and to learn from her extraordinary experiences is to read it in her own words, according to the authors of OWN IT: Oprah Winfrey in Her Own WordsÂ from publisher Agate B2‘s In Their Own WordsÂ book series.

The In Their Own Words series is a collection of insights from the world’s most influential entrepreneurs, in handy, pocket-sized volumes. This series is ideal for helping to inspire the business leaders of tomorrow. I, Steve: Steve Jobs In His Own WordsÂ wasÂ a New York Times bestseller, and the series continues with Never Give Up: Jack Ma In His Own Words, Impatient Optimist: Bill Gates In His Own Words, and more.

Edited by Anjali Becker and Jeanne Engelmann,Â OWN ITÂ consists of over 200 of Oprah’s most salient thoughts, memories, pieces of advice, and wisdom, gathered together in one, pocket-sized volume. The book shows every side of Oprah; savvy businesswoman, insightful mentor, empire builder, philanthropist, and intimate friend. The book draws from Oprah’s ever expanding range of platforms–television, radio, interviews, writing, public speeches, and more–to give a concise, but comprehensive look into the mind of one of the world’s most revered and intriguing public figures. The selected quotes illuminate both the woman herself and the multi-million dollar media conglomerate she has created, offering an intimate, authoritative portrait of the “Queen of All Media.â€

Few entrepreneurs have been astute enough to leverage their resources with the foresight that Oprah has demonstrated, and OWN ITÂ showcases Oprah’s indisputable business acumen, which is often overshadowed by her enormous influence and celebrity status.

The Oprah Winfrey NetworkÂ Â is headquartered in Los Angeles. As of June 2016, Winfrey, who is founder and CEO of Harpo Inc., based out of Chicago, holds the 28th spotÂ on the BE 100s Industrial/Service Companies list, with $121 million in revenue for 2015, down from $175 million reported for 2014. The entrepreneur to hold the second spot on thisÂ BE 100s list is the CEO of the staffing firm ACT-1 Group, Janice Bryant Howroyd, and she is the first black women to own and operate a company that is generating $2.4 billion in revenues. That’s not to say that Winfrey isn’t a billionaire. According to Forbes, Oprah’s net worth is reportedly at $3.1 billion,Â making her California’s richest, self-made woman.

With the book expected to drop on December 1 over the winter holiday, OWN IT: Oprah Winfrey in Her Own WordsÂ is a must read for entrepreneurs and Oprah fans everywhere.