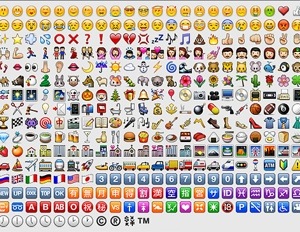 Busy hunting for the perfect emoji to describe your hectic work day? Well you’ll have more than 200 additional ones to choose from, although you may still be disappointed.

Unicode Consortium, the organization that manages the standardized list of emoji available across multiple platforms like Android and iOS devices, has released an updated list of emoji as part of the Unicode 7.0 Standard, bumping up the number by approximately 250.

There are a lot of much-needed additions, including a middle finger, a book, and various foods. Others, like a levitating businessman, or fog, probably won’t be as popular. There is one glaring omission from the pretty diverse update: diversity.

The diversity of emoji has been lacking since the beginning and hasn’t improved since its introduction of the man wearing a white turban.

The update brings the count of people of color from one to one. In other words, there are no people of color included in this update of more than 200 new emoji characters. There are three faces of color, but only if you count both the black moon and the smiling feces.

On the consortium’s website, one of its frequently asked questions pertains to its diversity, or lack thereof. “As with the examples of emoji characters representing food items above, an emoji character like U+1F474 OLDER MAN can vary in appearance depending on the font,” says the answer. “Unicode does not require a particular racial or ethnic appearance–or for that matter, a particular hair style: bald or hirsute. However, because there are concerns regarding the emoji characters for people, proposals are being developed by Unicode Consortium members to provide more diversity.”

Google, Apple, and other companies supporting emoji in their devices and software are responsible for creating the representations of the characters based on the consortium’s guidelines should they choose to support it, but they don’t include any characters of color in their interpretations. Apple has commented on this, claiming it is in full support of a more diverse cast of emoji, and is working toward that goal with the Unicode Consortium.

While proposals could be in development, the most recent update to Unicode 7.0 does little to nothing to address these concerns, and continues to ignore the worldwide pleas from users who desire a more diverse cast of characters instead of the yellow and white faces that users have available today.

Emoji site Emojipedia has a list of the additions. The Unicode Consortium has yet to respond to BE’s questions.

The Power of Chunking: 5 Steps That Radically Reduce Burnout

FacebookTwitterYoutube
← What You Should Know About the Roth 401(k) ← The Power of Chunking: 5 Steps That Radically Reduce Burnout
×
'