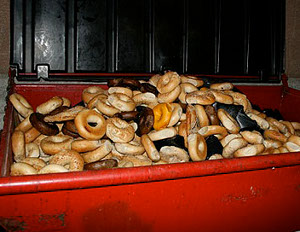 Everyday American supermarkets throw out food that is perfectly safe to eat because it is near, at, or past its sell-by date.

According to data from the USDA and Economic Research Service, U.S. food retailers discarded more than $166 billion worth of food in 2008 because it had “expired.â€

While some of these groceries end up in food banks and pantries, the majority of it is disposed of. The former president of the Trader Joe’s grocery chain wants to change this.Â Doug Rauch says he can take that still-edible food and turn it into healthy and affordable meals to sell to Boston’s low-income families. He’s opening a 10,000-square-food-store in Boston’s Dorchester neighbor for his Urban Food Initiative.

His plan is to make healthy meals available at the same prices as unhealthy fast-food meals, which studies have shown lead to obesity, diabetes and other chronic health conditions.

Customers will be able to purchase “expiredâ€ ingredients like milk and eggs for a fraction of their retail price. The store, which will be located at a community health center in Dorchester, a low-income neighborhood with limited food options, will serve as a pilot. If the outlet is successful, the project hopes to spread to other cities.

Massachusetts law allows for the sale of ‘‘expired” food as long it is ‘‘wholesome,” which means it smells and tastes good. Sell-by dates are not set by law, but by the manufacturers, and are generally conservative, meaning the food remains edible past the expiration date.

The project is not without critics. Residents will have to overcome the idea of eating what can be seen as everyone else’s “garbage.” Others worry the discount food shop will take away donations from area food banks.