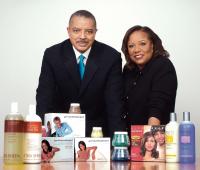 The new management team will be led by husband and wife team, Eric Brown and Renee Cottrell-Brown. The couple will head the organization as chief executive officer and executive vice president, respectively. They have extensive experiences in the ethnic hair care arena, having both held senior executive positions with the Pro-Line International Inc.

Johnson Products is the first hair care brand developed specifically for African-American hair. Ultra Sheen relaxers, hair dress, shampoos and conditioners are among the company’s many products that are staples of many African American households.

“The acquisition of Johnson Products represents the renewal of a family of products that revolutionized the ethnic hair care industry starting in the 1950s, and a next stage of growth for a legendary company that has been an iconic figure and model of success for African-Americans,â€ said Eric Brown.

In 2008, Johnson Products reported net revenue of $23 million. The deal returned a legacy brand to the African-American community, according to the company.

The company was founded in 1954 by George Ellis Johnson, Sr. and became the first minority-run enterprise to be listed on the New York Stock Exchange, in 1971. Today, the company offers more than 30 hair care products. The company is headquartered in Los Angeles, with offices in Dallas.
“It makes me extremely happy to know that the brands of Johnson Products will be owned by people who understand the African-American consumer market and care about the brands,â€ said foJohnson, 82, whose company became part Procter & Gamble in 2003 with its acquisition of Wella AG.

For the first time in 25 years, the number of African Americans incarcerated in state prisons for drug offenses has declined substantially, according to a study released recently by The Sentencing Project.

Based on an analysis of government data, including statistics from the Bureau of Justice Statistics, FBI, and the Department of Health and Human Services, the study also documents a corresponding rise in the number of whites in state prison for a drug offense, an increase of 42.6% during this time frame, or more than 21,000 people. The number of Latinos incarcerated for state drug offenses was unchanged.

Black declines in incarceration represent “the end result of 50 state law enforcement and sentencing systems” which need to be examined individually, according to the study. This decline comes as arrest and conviction rates drop for blacks.

The analysis also documented a sharp contrast between state and federal prison populations. While the number of persons in state prisons for a drug offense rose by less than 1% during the study period, the increase in federal prisons was more than 32%. These latter changes are attributed to ongoing aggressive enforcement of drug laws, including application of harsh mandatory sentencing policies. Despite declines in the use of crack cocaine, federal prosecution and incarceration levels for crack offenses remain high and have a stark racially disparate impact.