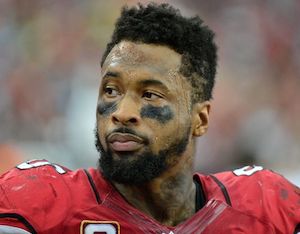 The image, which you can see below, was a screenshot from an NBC affiliate featuring the 16-year-old leaning against a railing. There has been some sexually suggestive commentary made about her figure and shape, even despite the fact that she is a minor. Dockett took the image and uploaded it to his Instagram where a user @DreDay_4 wrote a caption saying, “When is her prom?”

Dockett, 33, responded to the rash commentary and wrote, “OMG!” It was immediately seized upon by people who were coming to the defense of the president’s underage daughter. The Cardinals defensive end quickly deleted the post, but chose to respond to detractors Wednesday on Twitter. “Y’all chill, I never said anything about the president’s daughter. Not one thing! All I did was repost my boy IG pic. Get your facts straight!”

Asking those who are “tripping” to “chill out,” might not be the best way to respond to people on the Internet. Either way, this was not the first time that Dockett has created a social media firestorm. Back in 2013, he refused to apologize to the Asian comment for a joke he made on Twitter. He also took a naked shower on UStream for a $1,000 bet and got into a Twitter beef with Alabama’s Aaron McCarron over a woman who was then his girlfriend and is now the former quarterback’s wife.

You can see the image for yourself below:

Do you think that Darnell Dockett went over the edge for reposting such an image? Share your thoughts in the comments section below!