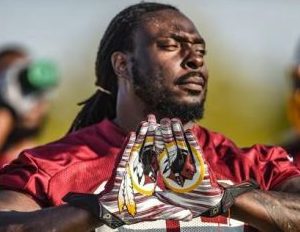 Courtesy of the Washington Redskins

Scores of athletes have found success in franchising from tennis star Venus Williams (Jamba Juice) to former NBA baller Jamal Mashburn (Papa Johns/Outback). Washington Redskins veteran defensive lineman Ricky Jean Francois also maintains an eye toward investing and diversifying his portfolio through franchise ownership. He has already purchased over a dozen Dunkin Donuts franchises along the Georgia coast, with plans on expanding into other states and possibly other ventures within the food industry.

Dunkin Donuts has been expanding its brand with NFL players. Last year, the company announced plans by U Donuts L.L.C. to develop 11 restaurants in Savannah, Georgia, by 2020. U Donuts is owned by franchisees Charles Cutler and Michael Ferreira in conjunction with NFL players including Jean Francois. The group purchased a territory of 14 units with three existing Dunkin Donuts outlets. “We are looking at another site–South Carolina–to expand even more,” says Francois.

The Greatest Return on Investment

Francois credits his financial adviser with guiding him towards the realm of franchising as a means to help shore up his retirement after a pro-ball career. “He talked to me about longevity. NFL also stands for ‘not for long,'” he says.

After reviewing nearly 100 franchise opportunities, he chose Dunkin Donuts because of its track record, in terms of security and profitability. “They were looking for franchise brands that would offer the greatest return on his investment,” he explains.

Once he retires from football, Francois plans to devote his full attention to operations. “I want to become more involved and go to each business to see what is going on daily.”

Francois shared with BLACK ENTERPRISE how NBA legend Earvin “Magic” Johnson is the businessman and Magic Johnson Enterprises is the business model that he seeks to emulate. As someone who admires stories about people that start from the bottom and rise to the top and become CEOs, he wants to make it in this fashion, too. “At the end of the day, I want to take care of my community,â€ he says, elaborating that he wants to embark on initiatives such as providing youth scholarship programs.

It’s Not About the Bling

A self-proclaimed “sneaker god,” Francois has amassed upwards of 300 pairs of shoes, some of which are extremely rare. Yet, the one thing that he would tell his younger self would be to not to be materialistic. “You don’t have to show off that you have money,” he says, noting there are people who are billionaires, but you could never tell by their khaki pants, t-shirt, thong slides, moderate homes, and compact car.

Francois has had his share of shining moments throughout a lifetime of football, and he has seen the highest level of competitive play; from a trip to Super Bowl XLVII, to wining an NCAA National Championship. The youngest of four children and one of the nation’s highest rated defensive linemen to come out of Miami Carol City Senior High School, Francois played college football for the Louisiana State University (LSU) Tigers from 2005-2008.

After his first pro stint with the San Francisco 49ers, and then onto the Indianapolis Colts, he departed the Midwest and inked a three-year deal to join the Washington Redskins, in February 2015. He helped the team return to the playoffs for the first time since 2012. A leader in the locker room and on the gridiron, he hopes he can help the Redskins build on last year’s success and return to the playoffs for another run at the Vince Lombardi trophy.

It Takes Grind to Be Successful

One skill that Francois has as a football player that is applicable to being a businessman is personal grind. Referencing a comment from Hollywood actor-producer Will Smith, he advises, “Don’t even have a plan B, because it is only going to distract you from plan A. When we set a game plan, it is written down on paper. We must get it done, we must execute. Some of the biggest empires in business today were built off of grind.”