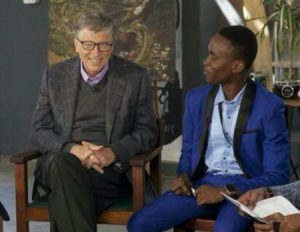 It isn’t often that you hear about someone in STEM turning down a job offer from one of the world’s most successful companies–Microsoft.

But that’s the story making the rounds on the web. Chris Kwekowe, a 23-year-old Nigerian computer science graduate of Lagos State University, turned down the enviable post of aÂ software engineer at the megabusiness.

Kwekowe reportedly turned down the job for reasons Bill Gates, who left Harvard before graduating, would surely understand: to devote time to developing his own startup. Kwekowe’s startup, Slatecube, a website that helps young Nigerians find jobs. According to reports on the web, Kwekowe and his brother fund the site by freelancing as website designers.

Turning the job down is one thing, but actually telling Gates that you turned down a job at Microsoft? Kwekowe took it in stride, saying that Gates simply smiled when he heard about the rejection.

Kwekowe wrote in a Facebook post: “Oh yeah, I did meet with Bill Gates in Durban, South Africa, where we had some candid discussion about everything, from his involvement with charitable causes in the continent to how he makes time to be a great father for his kids. My favourite moments were watching his reaction after I told him I turned down job offers from Microsoft and the likes to pursue something more defining for me, and how Africa’s development depends more on sustainable investments in innovative social startups like Slatecube that solve some of the continent’s biggest problems, rather than donating entirely to charity organisations who end up requiring more financial injection to deal with the minutest of issues.â€

The Bill & Melinda Gates Foundation is one of the largest philanthropies in the world and is doing exceptional work in the areas of heath, global development, and education. (BE Smart is a grantee of the Gates Foundation, but I would say that even if it weren’t.)

“Anyways, we’d be working with the Bill and Melinda Gates Foundation to make our value proposition at Slatecube a pan-African privilege. Soon, you’d rather be in demand across the globe, and engage in companies and projects that make you better, and suits your career goals. Nothing can really be better.â€

So it looks as if Kwekowe will be working with Bill Gates, though not Microsoft, after all. This looks like the beginning of a beautiful friendship.