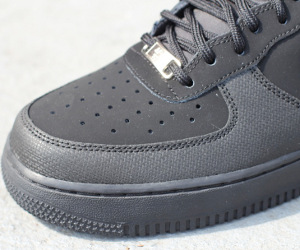 The U.S. Supreme Court has ended a competing footwear company’s attempt to invalidate Nike Inc.’s trademark for the popular Air Force 1 line of footwear. The sneaker, which was introduced in 1982 sells millions of pairs each year. Considered a staple in hip-hop, rapper Nelly even named a song after the sneaker in 2002.

The case began in 2009, when Nike claimed in a lawsuit that Already’s Sugar and Soulja Boy’s shoes infringed Nike’s trademark on the stitching, eyelet panels and other features of the Air Force 1. Already denied the allegation and filed a countersuit contesting the validity of Nike’s trademark for the popular line of sneakers. In March 2009, Nike issued a broadly worded covenant, stating that Already no longer infringed the Nike trademark at a level that made further litigation worthwhile. It promised that Nike would not litigate in the future against any of Already’s current footwear lines of any “colorable imitation.”

But Already refused to drop the case and accused Nike of dropping the original lawsuit, in a form of bullying meant to keep the case from ever reaching the courtroom. When the case finally reached the Supreme Court, Justice Roberts said allowing Already’s lawsuit to continue would encourage companies to use lawsuits as a weapon rather than a final conclusion to settle disputes.

“Accepting Already’s theory may benefit the small competitor in this case,” he said. “But lowering the gates for one party lowers the gates for all. As a result, larger companies with more resources will have standing to challenge the intellectual property portfolios of their more humble rivals – not because they are threatened by any particular patent or trademark, but simply because they are competitors in the same market.”