Locals Only! CafÃ© owner Refuses to Serve Non-Locals During Sundance 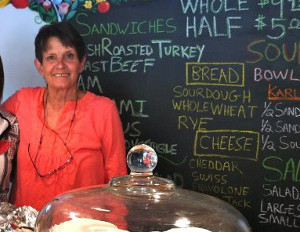 Having too many customers sounds like a problem most business owners would love to have. But one cafÃ© owner in Park City, Utah, is so overwhelmed with customers, she’s refusing service to people who aren’t local residents. She’s even gone as far as to hire a bouncer to keep out-of-towners out.

Uptown Fare, a small soup-and-sandwich eatery is a favorite among locals and usually a quiet place. During the Sundance Film Festival an estimated 50,000 people come into the city making the cafÃ© so busy, local residents can’t get in.

“I don’t really have room for all of them,â€ said Karleen Reilly, the owner of the cafÃ©. “We only make one sandwich at a time and I can’t make ten or fifteen to go at once.”

Reilly used to close her cafÃ© from Jan. 17th to the 27th, the date of the festival. But in 2009 she decided the solution was to deny access to out-of-towners, and only serve locals. She employs a bouncer to enforce the rule and locals must give a password to enter.

“It’s the most annoying weekend of all,â€ Reilly told the Salt Lake Tribune. She says of the Sundance attendees, “they would camp out in here with their computers, order two cups of coffee and stay four hours, I don’t want that or need that.”

Reilly opened Uptown Fare about 13 years ago after working as a caterer, following the advice of Oprah Winfrey.

“I had always thought about opening a place,” she said, “and then one day I heard Oprah talking about if you do what you love, you will do well.”

She says giving her regular customers priority is a way to thank the people who support her the rest of the year.

“I’ve had some devoted customers who have been coming for a long time,” she said. “I think they appreciate it.”