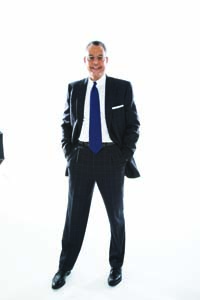 Dr. Reed Tuckson is passionate about diabetes for two reasons: the debilitating physical and financial toll it exacts on its victims, and the fact that the disease is “overwhelmingly preventable,â€ says Tuckson, executive vice president and chief of medical affairs at UnitedHealth Group. “We can prevent much of diabetes by simply changing our lifestyle.â€

Even for people who are at risk, Tuckson, one of BE’s 100 Most Powerful Executives in Corporate America, says there are preventable measures that guard against ever getting the disease, and when managed properly, those who do have it can control secondary consequences. Despite this evidence the numbers are staggering: Of the 26 million Americans who have diabetes, the Centers for Disease Control and Prevention reports that 27% are unaware that they have the disease. Of the 79 million adults who have pre-diabetes, 85% don’t know their condition. African Americans are contracting diabetes at nearly twice the rate of almost all segments of the population. According to the United Health Foundation’s America’s Health Rankings–a state-by-state analysis of the nation’s health–the incidence of diabetes for African Americans is 13.3%. It is 8% for whites and 7% for the Asian community.

As a result, Tuckson has launched a number of pilot programs and initiatives to help educate people about better managing and preventing the disease, enlisting a range of complementary and seemingly unlikely partners. Through UnitedHealth Group’s Diabetes Prevention and Control Alliance, programs are being tested with the YMCA in preventive measures and pharmacies as intermediary points for those with diabetes. Tuckson is also in a second-year partnership with Surgeon General Regina Benjamin and the Bronner Bros. International Hair Show, which attracts roughly 60,000 hairstylists and attendees each year. The Hair Fitness competition awards stylists the event’s second-highest prize for exercise-friendly styles.