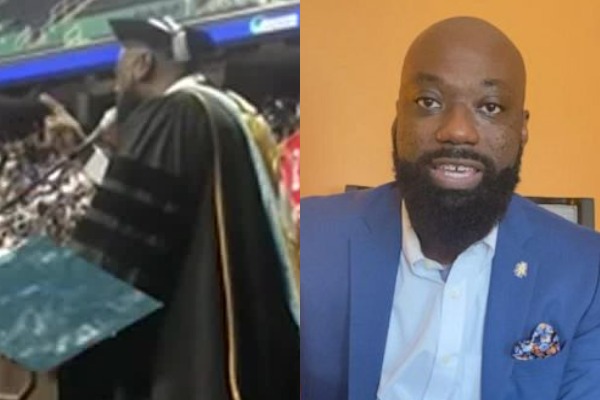 A principal in North Carolina left his students stunned by belting out an a cappella rendition of “I Will Always Love You.”

The graduating class from T. Wingate Andrews High School in High Point, NC, had no idea their principal could sing so well. But Marcus Gause left the scholars’ jaws dropped on Sunday with a spot-on performance of Whitney Houston’s age-old classic, Huff Post reported.

Video of Gause’s performance went viral after a clip was shared on Twitter.

Principal Marcus Gause surprises the graduating class of T. Wingate Andrews High School in High Point, North Carolina with this moving performance of "I Will Always Love You." pic.twitter.com/jwO2ur0F8s

While discussing his moving performance, the high school principal said he pushed past his nerves to belt out the now-viral moment.

“Of course, there was a nervousness because nobody sings behind Whitney Houston and the greats like Dolly Parton, but the lyrics were really what I was trying to portray to my students,” Gause told ABC News. “One of the things that the pandemic has really taught us is that we need more love, that students know that we love and care for them.”

The graduating class held a special place in Gause’s heart as he followed them from their entry into the school four years before.

Gause’s students have praised him for the special performance and memory they’ll take into their future endeavors.

“Mr. Gause singing to us something I will never forget,” student Mekhi McRae said. “He is a big part of why I am who I am today.”

The song has become a staple at weddings, graduations, and moments of special significance. It was originally penned by Dolly Parton back in 1974 and was remade by several musicians. The late Whitney Houston recorded the most notable remake of the song with her 1993 release for her smash film, The Bodyguard. Houston’s version spent 14 weeks at the number one spot on the Billboard Hot 100.