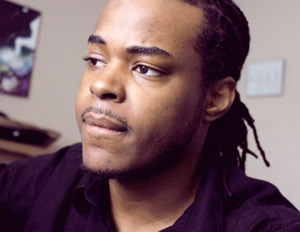 Andrew Augustin, also known in the gaming community as DatBoiDrew, always had a knack for creating characters. In high school, he crafted illustrations for his own comic books and later drew the attention of local music artists in need of cover art for their albums. That later translated to Augustin breaking into the gaming industry, where he now serves as the owner, founder, and lead designer of Notion Games. The Austin, TX-based company’s debut mobile release is Up Up Ubi, which is available now in the iTunes app store. BlackEnterprise.com caught up with Augustin, who explains how he broke into the gaming industry and how he got his indie company off the ground. –Tamika Moultrie

How did you make the leap from budding cartoonist to starting your own game company?

A good friend of mine and indie game journalist of DualShockNexus, Jeff “Treezy504” Rodgers gave me the idea to start my own company. Along with working with EA [Electronic Arts] to create designs for Sims: Pets. Those two factors influenced me to make games and start my own company.

What was your experience like working with EA, one of the largest and most successful game developer/publishers in the gaming industry?

I learned how there is no “Iâ€ in team and how teamwork is crucial and vital in executing projects. Plus, learning how the pre-production process of planning out concept art for future game character models. Another opportunity I was able to experience was being able to learn from the founders of Electronic Arts on how they began as a startup company without a large backing or amount of employees. It was very inspirational to give me a push to start Notion Games to create my own video games.

Up Up Ubi is your first video game title; how did the game come about.?

Up Up Ubi was a concept that was made up on the fly. It started out as having a character bouncing on balloons. This simple concept of Up Up Ubi went from a simple concept to a complex one once we included important [elements]. We actually changed the concept four times for this project… I also wanted to have a really great soundtrack. Streets of Rage 2 was the game for me that had a great soundtrack that I can remember forever. I wanted to add that same effect to my games. It’s another important factor in games today.