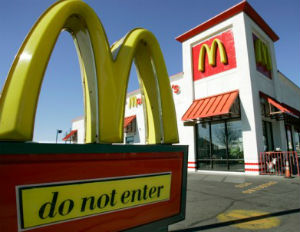 Hundreds of fast food workers are staging a one-day strike, a brave act especially in their nearly union-free industry. Organizers expect workers at dozens of stores to join the strike to protest low wages, limited hours and uncertain employment.

At 6:30 a.m. this morning New York City workers started organizing at McDonald’s, Burger King, Dominos, KFC, Taco Bell, Wendy’s and Papa John’s. Organizers are expecting today’s strike to have workers from each of those chains protesting, with the largest group coming from McDonald’s.Â  The workers are seeking to form an independent union, the Fast Food Workers Committee. The organizing drive is being backed by community organizing groups such as New York Communities for Change and the SEIU.

One worker said his attempt to organize was met with retaliation. Jose Cerillo, a 79-year-old who cleans tables and floors at a New York McDonald’s told Salon.com he was suspended by the company on Monday after signing up co-workers on the campaign petition. According to Cerillo, management said the punishment was for violating a “no solicitationâ€ policy.

He said he circulated the petition during break times and outside of work, which would not violate company policy.

Cerillo said he got involved after receiving a call from an organizer at home a few months ago.

Cerillo, who has worked at several McDonald’s locations since 1996, says he makes $7.40 an hour, 15 cents above minimum wage.

Another worker, Raymond Lopez, is a 21-year-old who’s been employed by McDonald’s for 2 year and says he makes $8.75 an hour as a shift manager. He works at McDonald’s and at two other jobs, catering and doing leaf work — while paying off student loans, pursuing an acting career and helping to support his family.

“Everything we do needs to be fast, needs to be perfect,â€ said Lopez. “When you’re actually there for eight hours smiling like you’re on the Miss Universe contest, it’s not easy.â€

He said McDonald’s supervisors “make us work off the clock all of the timeâ€ and “there’s a lot of verbal abuse.â€

NYCC organizers have been meeting with workers for a month in an attempt to form a union. Fast Food Workers have been signing petitions demanding the chance to organize a union without retaliation and a raise from nearly minimum wage to $15 an hour.

Today’s strike also comes one week after non-union workers staged their own strike. Lopez said that, while he had already decided to strike, he drew additional inspiration from the Black Friday example.

“I thought it was really ballsy for someone to do that,â€ said Lopez. “Which I admired.â€

Lopez said his decision to strike “got scary probably a couple days ago, when I realized the seriousness of this.â€ Despite that fear, he said, “I still believe in what I’m doing, so I’m going to go ahead and do it.Â I don’t know what to expect from the strike,” said Lopez. “It’s such a unique thing. A lot of stuff could happen. It’s not going to be overnight.â€