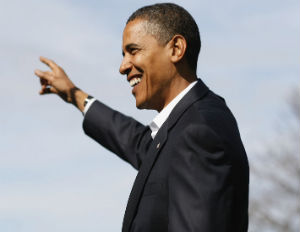 After acknowledging the storied legacy of the university, Obama pivoted to what he admitted would be a “controversial statement.”

“America is by almost every measure better than it was when I graduated from college,” the president said. “It also happens to be better off than when I took office, but that’s a longer story,” he continued, to delighted laughter and applause from the audience.

Explaining that while many forms of racial injustice are still prevalent throughout today’s society, Obama insisted that the graduates not lose sight of the progress made by those before them.

“I tell you all this because it’s important to note progress. Because to deny how far we’ve come would do a disservice to the cause of justice, to the legions of foot soldiers; to not only the incredibly accomplished individuals who have already been mentioned, but your mothers and your dads, and grandparents and great grandparents, who marched and toiled and suffered and overcame to make this day possible,” Obama said. “I tell you this not to lull you into complacency, but to spur you into action–because there’s still so much more work to do, so many more miles to travel.”

President Obama then offered the graduates his thoughts on how they could effectively continue to work to end racial injustice.

“First of all–and this should not be a problem for this group–be confident in your heritage,” he said to approving applause from the audience. “Be confident in your blackness. One of the great changes that’s occurred in our country since I was your age is the realization there’s no one way to be black.”

President Obama then stressed the importance of voting and participation within the political process. “When we don’t vote, we give away our power, disenfranchise ourselves.”

Finally Obama, discussed the necessity of active engagement and compromise when trying to facilitate change, particularly within the criminal justice arena. He praised Brittany Packnett, an influential member of the Black Lives Matter movement, as an example of such compromise when Packnett agreed to join Obama’s Task Force on 21st Century Policing.

“Some of her fellow activists questioned whether she should participate. She rolled up her sleeves and sat at the same table with big city police chiefs and prosecutors. And because she did, she ended up shaping many of the recommendations of that task force,” Obama said. “If young activists like Brittany had refused to participate out of some sense of ideological purity, then those great ideas would have just remained ideas. But she did participate. And that’s how change happens.”

President Obama wrapped up his remarks with a sentimental throwback to his first presidential campaign.

“And when your journey seems too hard, and when you run into a chorus of cynics who tell you that you’re being foolish to keep believing or that you can’t do something, or that you should just give up, or you should just settle–you might say to yourself a little phrase that I’ve found handy these last eight years: Yes, we can.”

Click here for the full transcript of President Obama’s remarks at Howard’s 2016 commencement.