Obama, Romney Position Themselves for Final 2 Weeks of Battle 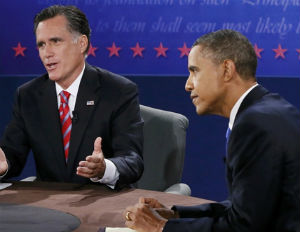 Neck-and neck in recent polls, President Barack Obama and Republican challenger Mitt Romney squared off in their final presidential debate last night, dueling over policy positions and respective visions for America. In fact, according to a CBS News instant poll, Obama scored a clear two-to-one victory against Romney in a session in which candidates discussed how they would handle international crisis, national security and America’s position in the world. As such, they discussed everything from the recent upheaval in the Middle East to contentious China-U.S. relations.

Millions of voters have spent the past three weeks glued to the tube, using the debates as another evaluation tool of these candidates’ views, posture and temperament.

Much has been reported on Obama’s lackluster performance in his first appearance. In the last two debates, however, the incumbent forcefully pushed his achievements – averting a Great Depression, passage of health care reform, pulling the troops out of Iraq, killing 9/11 terrorist attack mastermind Osama Bin Laden, to name a few – over the past four years while making his case to complete his mission in his second term as he defines a Romney presidency as a return to the “foreign policy of the 1980s, the social policy of the 1950s and the economic policy of the 1920s.”

The three debates also gave voters a chance to size up the type of leadership Romney would offer. In the 90-minute session at Florida’s Lynn University, he took a radical departure from his hyper-aggressive performance in the first two debates; Romney played it safe, not wanting to make any gaffes and, at times, echoing the president’s positions on backing the ouster of Egyptian President Muburak during last year’s Arab Spring and use of armed drone strikes in Afghanistan, to name two shockers. (Obama used those moments to stress his opponent’s agreement.) Romney still was willing to take swipes at the president as a “weak leader,” failing to assert American interests and values, and a poor manager of the U.S. economy and federal budget.

Obama was quick to characterize Romney as being “all over the map” on foreign policy, slamming his ideas as “wrong and reckless.” Deflecting criticism over his actions in Iran, Syria, and across the Middle East, the president sought to communicate “strong, steady leadership.”

“Every time you’ve offered an opinion, you’ve been wrong,” the president told Romney regarding his previous positions on Iraq and Afghanistan. “You said that we should still have troops in Iraq to this day. You indicated that we shouldn’t be passing nuclear treaties with Russia despite the fact that 71 senators, Democrats and Republicans, voted for it. You said that, first, we should not have a timeline in Afghanistan. Then you said we should…”

Romney countered: “Attacking me is not an agenda. Attacking me is not talking about how we’re going to deal with the challenges that exist in the Middle East, and take advantage of the opportunity there, and stem the tide of this violence.”

Turning to Iran, Romney maintained that the nation is “four years closer to a nuclear weapon” and that Obama has “wasted” the last four years because “they continue to be able to spin these centrifuges and get that much closer.” Obama defended his actions in Iran, citing his administration’s sanctions have been effective in bringing Iran to its “weakest point economically, strategically, militarily than in many years.”

It was clear both candidates used the debate as a positioning vehicle to target undecided and swing-state voters. Obama sought to solidify his role as decisive, experienced commander-in-chief while Romney continued to pivot from hawkish right winger to a thoughtful, peace-focused leader.

Take the exchange on the auto industry. Obama scored points with his administration’s bailout in 2009 while asserting Romney’s advocacy of letting the sector go down the tubes. The challenger refuted the allegation (based on a New York Times op-ed piece he wrote) and defined himself as “a son of Detroit.” (His father, the late Michigan Gov. George Romney was the head of now-defunct American Motors.) Throughout the discourse, both candidates were mindful of how their rhetoric would play in the battleground state of Ohio.

Another example: Romney’s argument for education and women’s rights in the Middle East as a means of recovering from media coverage and Twitter chatter that accompanied his comments during the second debate about using “binders full of women” to identify qualified female appointees as Massachusetts governor.

Now, both candidates will seek to use any message and momentum gained to attract voters on the sidelines — especially in the other battleground states like Nevada, Virginia, Florida and North Carolina — as they seek to pump up their base. Obama will focus on being an experienced leader seeking to move the nation forward. Romney wants to paint himself as a superior manager of the economy who will put the nation’s fiscal house in order.

The debates represented three critical rounds in this race but there are still many more to go over the next 13 days.