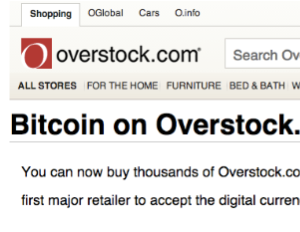 Overstock.com was one of the first major online retailers to adopt the virtual currency as a form of payment.

Sure, the Bitcoin market is no doubt volatile, but that hasn’t stopped a few online retailers from accepting the cryptocurrency as payment, and profiting from it as well. One big name in the online retail space that’s benefited is Overstock.com.

Last week the online retailer announced that it has processed over $1 million in Bitcoin purchases since it started accepting the virtual currency in January.

Overstock CEO Patrick Byrne spoke with Business Insider about the success the virtual currency has brought his company. “There was a huge surge…the first day, with people showing support,” Byrne stated. “It’s since dropped to $20k to $30k per day, but it’s gradually increasing from there. It’s going well.”

Overstock isn’t running its own Bitcoin exchange, rather it has partnered with the already established Coinbase exchange run by co-founder and CEO Brian Armstrong, based in San Francisco, California.

The company’s raised over $31 million from various venture capital firms including Y Combinator and Andreessen Horowitz.

Considering what you can and can’t buy with bitcoins, the fact that a major online retailer lets you buy everything from sheets to smartphones with the extremely volatile currency definitely lends credibility to Bitcoin as a legitimate digital currency, even with reports of theft by hackers causing major Bitcoin exchanges like Mt. Gox to shut down.

Patrick does have other motives for pushing for the virtual currency’s success: he’s tired of big banks. “I get an enormous pain in the ass when I think of our centralized financial system,” Byrne said. “I think our country’s gotten under the thumb of Wall Street oligarchs. They’re enemies of the republic and Bitcoin represents a mass movement to get rid of the knuckleheads. There’s a huge political side to this that I endorse.”

Byrne’s political viewpoints are no doubt served by Bitcoin’s success, but making a few bucks on the side from it doesn’t hurt either.