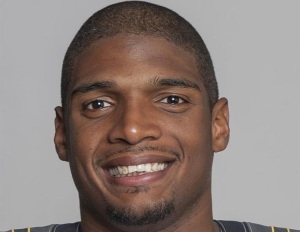 Michael Sam, who made history when he became the first openly gay football player drafted into the NFL, will get to tell his story and share his groundbreaking journey in an exclusive documentary that will air on the Oprah Winfrey Network.Â  The 2013 SEC Defensive player of the year was drafted in the 7th round by the St. Louis Rams, and played with the team in preseason. But he was cut in late August and later picked up the Dallas Cowboys practice squad, though was waived after seven weeks. He was released and is a free agent.

The documentary, “Michael Sam,â€ was originally announced back in May as a multi-part series but transitioned into a 90-minute documentary when shooting was postponed to allow Michael to focus on football. It will air on OWN Christmas weekend (Saturday, December 27 9-10:30 p.m. ET/PT).

The OWN documentary “Michael Samâ€ follows the former University of Missouri college football star as he enters the world of professional football and vies for a spot on an NFL team.Â Cameras get up close and personal with Sam as he candidly discusses a childhood fraught with tragedy and poverty, as well as his emotional decision to come out as a gay man in the world of pro sports.

The documentary captures the moment when Sam was drafted by the St. Louis Rams, the intense media scrutiny that immediately followed, and his struggle to stay focused despite the pressure and chaos.Â  Additionally, the documentary explores his relationship with his boyfriend Vito and the challenge of balancing his personal life alongside his pursuit of NFL stardom.

Following the documentary, beginning at 10:30 p.m., Oprah Winfrey exclusively speaks with Michael Sam on “Oprah Prime.â€ In his first television interview since being cut from the NFL, Sam discusses the worldwide reaction following his public announcement.Â He also talks about his historic decision to come out as a gay man in the world of pro sports and his triumphs and tears as he pursues a career in professional football.Â  Oprah and Michael also talk about his difficult childhood, his boyfriend Vito, and how he hopes sharing his story will further the conversation around equality.

“Michael Sam is breaking down boundaries and showing the world what it means to be authentic to who you are no matter what the circumstance.Â  That’s a central theme with the documentary and we hope it continues an important discussion,â€ notes Erik Logan, president, OWN and Harpo Studios.Â  “Michael is an inspiration to millions and we are proud to be able to share his courageous story — in his own words — with our audience.â€