The Pentagon Is Set To Make The Pfizer Vaccine Mandatory 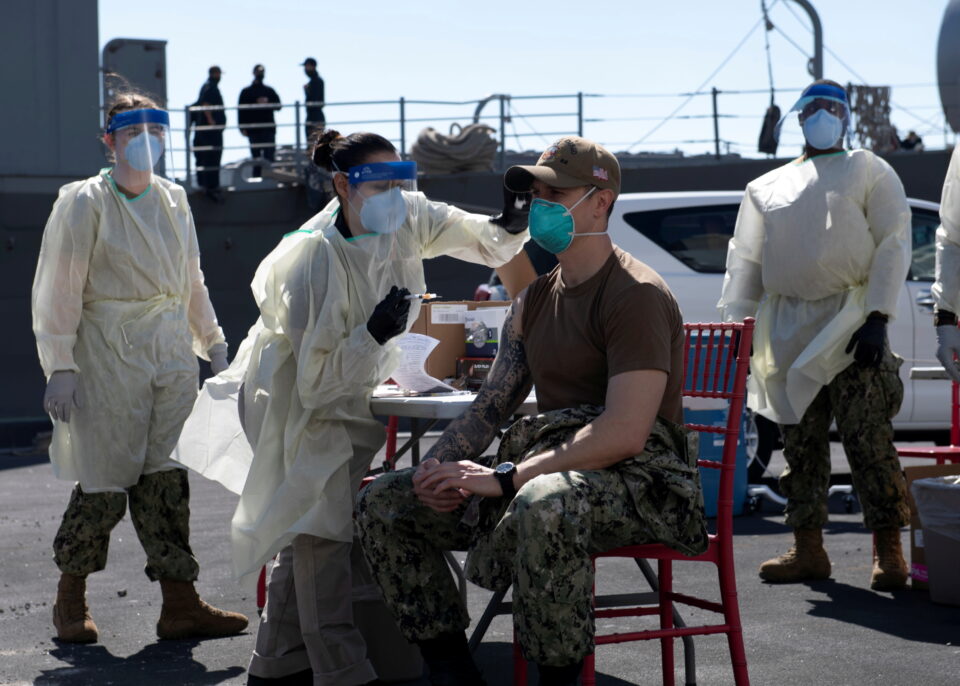 FILE PHOTO: A United States Navy officer from the amphibious ship USS San Diego (LPD 22) receives a vaccine against Coronavirus (COVID-19) at the navy port in Manama, Bahrain in this picture taken February 26, 2021 and released by U.S Navy on February 27, 2021. Brandon Woods/U.S. Navy/Handout via REUTERS

Reuters – The Pentagon is preparing to issue updated guidance to require all U.S. service personnel to be vaccinated after Monday’s approval of the Pfizer Inc/BioNTech SE COVID-19 vaccine by the Food and Drug Administration, Pentagon spokesman John Kirby said.

Kirby told a briefing the completion date for vaccine guidance was still being worked on.

The FDA granted full approval on Monday to the vaccine, which had earned emergency-use authorization in December, making it the first to secure such validation as U.S. health authorities struggle to win over vaccine skeptics.

Asked if similar guidance could be given for other COVID-19 vaccines, Kirby replied: “Right now we’re focused on the Pfizer vaccine because of the FDA approval that came in this morning.”

The Pentagon said this month it would seek President Joe Biden’s approval by mid-September to require 1.3 million military members to get vaccinated against COVID-19.

After setting COVID-19 rules for federal workers, Biden last month directed the Pentagon to look into “how and when” it would require members of the military to take the vaccine. Biden said then he strongly supported the Pentagon’s plan to add the COVID-19 vaccine to the list of required vaccinations for service members by mid-September.

U.S. Defense Secretary Lloyd Austin has said the deadline could be moved up if the FDA approved the vaccine earlier.

The U.S. military said this month that around half the U.S. armed forces have taken the vaccine, a number that climbs significantly when counting only active-duty troops and excluding National Guard and Reserve members.

Vaccination rates are highest in the Navy, which suffered from a high-profile outbreak last year aboard an aircraft carrier. About 73% of sailors are fully vaccinated, compared with the U.S. national average of about 60% of adults ages 18 and over.

Because U.S. service members are generally younger and fitter, relatively few of them have died as a result of COVID-19 – just 28 in total, according to Pentagon data.

Here’s a graphic on U.S. presence in Afghanistan over the years:

FacebookTwitterYoutube
← The #CrateChallenge Has Social Media in a Frenzy and Daredevils Risking it All ← Black Family’s Home Appraisal Increased $92,000 After Removing All Signs of Their Race
×