Piers Morgan: 'Blacks Must Kill N-Word For It To Die' 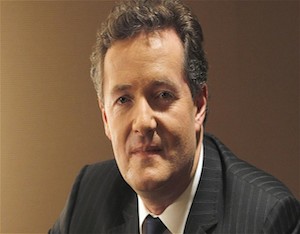 Newick, East Sussex, England’s own Piers Morgan earned another distinction in his long list of accomplishments: He wrote an op-ed about the N-word.

The six-letter noun, which according to Oxford Dictionary defines the word as “a contemptuous term for a black or dark-skinned person,” was not implicitly uttered by the former CNN talking head. Yet, he was the pen behind an op-ed piece that recently went live on the United Kingdom’s Mail Online website.

In it, the 49-year-old journalist and celebrity judge of Britain’s Got Talent attempts to call-to-action African and African American youths to “obliterate [and] tie [the word] to a literary post” so that it never “rears its vicious head again.” Citing the word’s usage on social media and in American public school, Morgan’s position comes as a person who knows he can’t utter the word, yet feels obliged to share his opinion.

To which no one in the entire, whole, vast and infinite universe ever asked for – ever.

Calling to the reader’s attention that the word is “so ingrained in pop culture,” Morgan feels that young blacks are “reared to the soundtrack of N-word splattered rap music,” even as they acknowledge the painful history of the word. “I don’t use it,” Morgan admonishes. “[I] would never use it. But it has become astonishingly ubiquitous in modern American society.” He backs his statement with analytics from Topsy.com, which claim that the N-word would be used on Twitter upwards to 500,000 times in just a day.

In an effort to enact a real-time response, the social media service quickly took note of his op-ed and gave a collective yawn and side-eye to the Harlow College graduate. Twitter, an instant barometer of how subjects influence the greater population, decided that, yes, the N-word is an odious word, but Piers Morgan is almost as equal of an evil stain in human culture.

It’s easy to see that the former Daily Mirror editor’s heart was in the right place, Twitter serves up a healthy dosage of slander in the name of free speech.

With that said, Black Enterprise wants to know your thoughts about Piers Morgan’s “Kill the N-Word” op-ed. Click here to read the full piece and don’t forget to leave your opinions for us to read below!