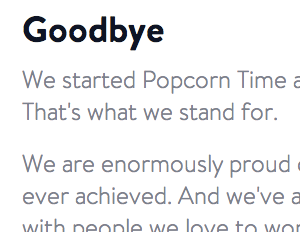 Popcorn Time let you stream movies using copyright-violating torrents, but was not breaking any laws by doing so.

In a post on its homepage, Popcorn Time announced its shutdown mere weeks after being unveiled as a video streaming app for torrents. “Popcorn Time is shutting down today. Not because we ran out of energy, commitment, focus or allies. But because we need to move on with our lives,” read the statement on the site.

As if to dispel rumors of the shut down due to any form of copyright infringement or other violated law, the post clearly indicates that the team at Popcorn Time checked with legal counsel multiple times-four, to be exact.

Popcorn Time’s slick interface and ease of use led it to be quickly known as “Netflix for pirates.” It allowed users to access any movie uploading using torrent files, leading to many recent movies becoming available for a free viewing.

The team expressed frustration at certain laws governing movie streaming rights in various countries. Take Argentina for example:,” the site read. “Streaming providers seem to believe that ‘There’s Something About Mary’ is a recent movie. That movie would be old enough to vote here.”

Without access to recent films, many people around the world rely on sites like The Pirate Bay to access content that is unavailable to them. Unfortunately, this also puts them at risk of violating copyright laws, an offense that could come with a fine or even jail time.